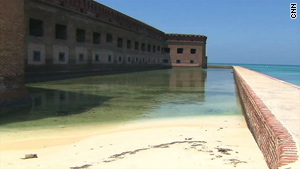 About $7 million has been allocated to repairing Fort Jefferson. It sees about 52,000 visitors a year.

The crumbling citadel rises 40 feet from the turquoise water of the Gulf of Mexico, an outpost of a bygone era. Built on an island in Florida's Dry Tortugas, 70 miles past Key West, the fort is being restored by a squad of craftsmen who spend three-week shifts there between hurricane seasons.

A cocoon of mesh and scaffolding shrouds one section of its 8-foot-thick walls as they work. It's a grueling job, but it's one Dennis Wood, a mason from Massachusetts, says he's glad to have.

"Things are slow today, you know," Wood said. "Got a job offer to come down here for the winter, so we took it."

Efforts to restore Fort Jefferson have been under way for about 30 years. The current phase received a boost from the economic stimulus bill that passed Congress in 2009, which devoted $7 million to the project. But planners estimate another $13 million is needed, and that money has yet to be allocated.

The six-sided fort, roughly the size of Yankee Stadium, was designed to protect shipping lanes through the Gulf of Mexico. Construction began in 1846, but advancements in the science of artillery rendered it obsolete before it was finished. During the Civil War, the Confederacy never bothered to try to seize it from Union forces.

The Union kept a garrison of about 2,000 men there and used it mostly as a prison for Confederate captives and deserters. It wasn't until after the war that it received its most famous inmate -- Samuel Mudd, the Maryland doctor convicted of aiding Abraham Lincoln's assassin, John Wilkes Booth, by setting his broken leg.

Mudd served more than three years at Fort Jefferson before receiving a pardon in 1869. The Army abandoned the fort in 1874, but the islands served as a staging area for U.S. warships during the Spanish-American War in 1898 and housed a seaplane base during World War I.

It takes a 2 1/2-hour ride on a catamaran ferry to get to Fort Jefferson. The installation and the surrounding national park draw about 52,000 visitors a year, according to the National Park Service. But more than a century and a half of hurricanes and salt air have taken their toll on the massive walls.

The iron shutters that shielded the fort's guns have expanded as they rust, cracking and displacing the surrounding walls.

Wood, the six other masons and eight laborers who are working to restore Fort Jefferson were unemployed before this job, said Ken Uracius, the project manager for Enola Contracting Inc., which is doing the work. Uracius estimates about 100 people see some sort of work from the project.

"I have boat captains," he said. "I have people running the boat that brought you out here. I have brick makers, I have cement makers."

Work has gone on periodically for the past 30 years and is likely to go on for many more. But the Park Service says it's important to save a unique monument.

"If we lose Fort Jefferson, that's it," said Kelly Clark, who oversees the reconstruction project for the Park Service. "There are no other Fort Jeffersons."