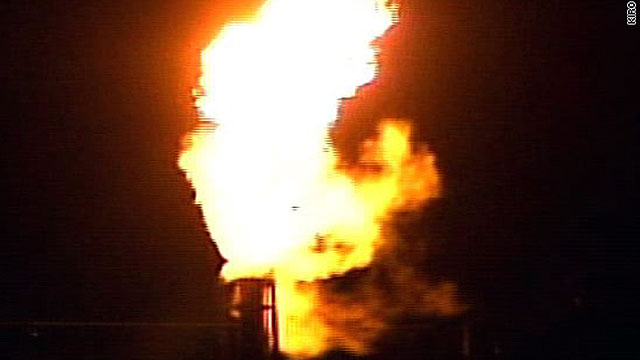 (CNN) -- A fire at a refinery in Washington state killed four people and injured three, a spokeswoman for a medical center said Friday.

The company that owns the refinery, the Tesoro Corp., earlier had announced three deaths from the fire. A fourth person, a 29-year-old woman, died from her injuries at Harborview Medical Center in Seattle, Washington, said medical center spokeswoman Susan Gregg-Hanson.

Three others -- a 36-year-old woman, a 34-year-old man and a 41-year-old man -- remain in critical condition at the medical center with major burns, Gregg-Hanson said.

None of the dead were identified.

The fire at the Anacortes, Washington, refinery occurred shortly after midnight at the naphtha unit of the refinery while maintenance work was being performed, the Tesoro Corp. said.

The fire was contained around 2 a.m. Friday and affected units have been shut down, Tesoro said on its Web site.

CNN affiliate KCPQ reported that three workers were missing, and that a search was under way.

The cause of the blaze was not immediately known. KCPQ said that people reported feeling an explosion as far as five miles away.

"This is a very sad time for our organization," said Bruce Smith, Tesoro's chairman, president and chief executive officer.

"Everyone in the Tesoro family appreciates the impact that this will have on the families involved, and we are responding quickly to ensure the safety for our employees, contractors and the neighboring community," he said.

Tesoro Corp. is an independent refiner and marketer of petroleum products, according to its Web site. Through its subsidiaries, it operates seven refineries in the Western United States with a combined capacity of approximately 665,000 barrels per day.

Anacortes is about 80 miles south of Vancouver, British Columbia.