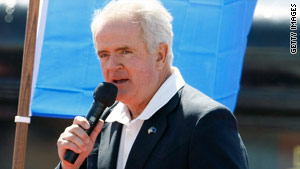 Nevada Gov. Jim Gibbons, at a Tea Party rally last weekend in Searchlight, was among the governors receiving the letters.
STORY HIGHLIGHTS

Washington (CNN) -- A domestic extremist group has sent letters to more than 30 U.S. governors demanding they resign, the Department of Homeland Security and the FBI said in an intelligence note.

The note, dated Monday, said the letters told the governors to vacate their posts within three days.

The FBI and DHS said there do not appear to be credible or immediate threats of violence attached to the letters.

The group behind the letters has a "Restore America Plan" that calls for the removal of any governor who fails to comply, the intelligence note said.

While DHS has no information that the removal refers to a specific plan for violence, "law enforcement should be aware that this could be interpreted as a justification for violence or other criminal actions," the note said.

Other steps in the group's plan include "establishing bogus courts, calling of 'de jure' grand juries, and issuing so-called 'legal orders' to gain control of the state," the note said.

Officials in Illinois would not say whether they had received a letter. Officials in Maryland and Idaho said the governors' offices there had not received such a letter.

Nevada Gov. Jim Gibbons received one letter Monday and three more Wednesday, including one by fax, said his chief of staff, Robin Reedy. The group behind the letters does not believe there should be a federal government, Reedy said.

The letters were not handwritten but did have some handwritten signatures, Reedy said Thursday.

The office had been warned in advance to be on the lookout for the letter, she said.

Gibbons' office stepped up security at the Nevada Capitol in Carson City after receiving the letters.

Everyone had to enter through one entrance, and an X-ray machine and metal detector were brought in.

Boulders were placed in front of the Capitol so vehicles could not drive close to the building.

The governor hadn't seen the letters because he had been in Las Vegas for a few days, Reedy said.