U.S. believes al Qaeda still deadly but 'on the run' 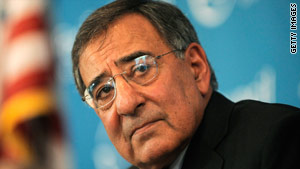 Washington (CNN) -- An intercepted message indicates some members of al Qaeda are looking to the group's founder for more visible leadership, a U.S. intelligence official told CNN Wednesday after CIA director Leon Panetta talked about the message in a newspaper interview.

Osama bin Laden is "rarely seen, rarely heard," the official said, and that is "troubling" to those who see him as their leader.

"There are strong indications that some al Qaeda terrorists would like Bin Laden to take a higher profile," the official said, adding that Panetta's comments in the Washington Post were referring to the al Qaeda core that is operating along the Pakistan/Afghanistan border.

Al Qaeda "is on the run, but still coming after us," the official said.

CNN was unable to corroborate the existence of the intercepted message or its contents outside the U.S. intelligence community, and neither the official nor Panetta provided any further information about it or its contents.

In the Post article, Panetta credited the CIA's aggressive campaign against al Qaeda and the Taliban in the Afghanistan-Pakistan border region for the terror group's apparent disarray.

"Those operations are seriously disrupting al Qaeda," he told the paper. "It's pretty clear from all the intelligence we are getting that they are having a very difficult time putting together any kind of command and control, that they are scrambling. And that we really do have them on the run."

Six weeks ago, Panetta told the Senate Intelligence Committee that the thought "that al Qaeda and its terrorist allies and affiliates could very well attack the United States in our homeland" keeps him up at night.

"Having said that, the biggest threat I see is not so much that we face another attack similar to 9/11," he told the senators. "I think the greatest threat is that al Qaeda is adapting their methods in ways that oftentimes make it difficult to detect."

In his testimony, Panetta said that operations targeting al Qaeda and its allies were forcing them to move "to other safe havens and regional nodes, in places like Yemen and Somalia, the Magreb and others."

"The chances he'll be captured alive are infinitesimal. He'll be killed by our people, or his own people so he's not captured by us," Holder told the subcommittee of the House Appropriations Committee that oversees the Justice Department budget.

Last week, Belgian terror suspect Malika el Aroud said during testimony in her trial that her husband --Moez Garsallaoui, who is wanted on terror charges -- met bin Laden in the summer of 2008.

There have been no confirmed sightings of bin Laden since he escaped from Tora Bora in Afghanistan in December 2001. While the working assumption of Western intelligence agencies is that he is somewhere in the Afghanistan-Pakistan border region, it is thought few al Qaeda members know his location.

Last December, in an interview with ABC, Defense Secretary Robert Gates said "it's been years" since there was good intelligence on where bin Laden is located.

"Well, we don't know for a fact where Osama bin Laden is. If we did, we'd go get him," the secretary said.

Many audiotapes purportedly recorded by bin Laden have been released in that time, the most recent on January 24 in which the voice on the tape praises the attempt to blow up Northwest Airlines Flight 253 en route to Michigan on December 25 and warns the United States of more attacks.