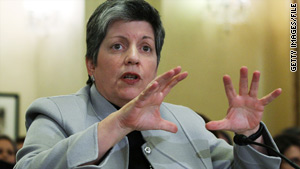 Washington (CNN) -- Another brick is falling from the Bush administration's highly touted "virtual wall" that was intended to keep illegal immigrants from entering the United States.

Homeland Security Secretary Janet Napolitano said Tuesday she will take $50 million in federal stimulus money away from the Secure Border Initiative, also known as SBInet, and spend it on proven, off-the-shelf technology to protect U.S. borders.

As originally envisioned, SBInet was to give the United States control of its borders through a system of movable surveillance towers, high-tech sensors, radars, cameras and communication relays that would give Customs and Border Protection agents the ability to see and respond to intruders.

But the system, which is being developed by Boeing, has come under withering criticism from the Government Accountability Office and others who say that it has been riddled with problems.

Napolitano said the SBInet has been "plagued with cost overruns and missed deadlines."

She said she is freezing all other SBInet funding beyond money being spent on a 53-mile stretch of border in Arizona until a re-assessment of the project she ordered in January is completed.

"Not only do we have an obligation to secure our borders, we have a responsibility to do so in the most cost effective way possible," Napolitano said in a statement.

Last year, Napolitano announced that $50 million in stimulus funding would be spent to accelerate deployment of SBInet's surveillance technology and associated command and control technologies.

But a homeland security official said DHS is opting to reallocate the money to something the department believes will be more effective at providing border security.