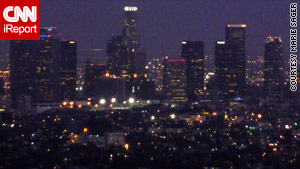 There were no immediate reports of damage or injuries, authorities said. However, police and fire officials said they had received calls from residents awakened by the quake. Its epicenter was 11 miles east-southeast of the Los Angeles Civic Center, the USGS reported. It struck at 4:04 a.m.

"First it was a small one and then a big one," said Chris Curiel, who was working at the Vallejo Mini Market in Whittier, a town near the epicenter. "It felt like the floor was sinking."

He said merchandise on the shelves began shaking, but there was no damage. Because his market is a gas station, earthquakes are a bit more worrisome, he said.

Curiel said he knew immediately an earthquake was happening, and he has felt one before.

Ravi Singh, night shift supervisor at a 7-Eleven in Pico Rivera -- the town a mile east-northeast of the epicenter -- told CNN he was making coffee when the store's windows started rattling. There was no damage, he said. "Everything is fine."

iReporter says "it sounded like there were kids dancing upstairs"

Although the temblor was centered 11 miles below the Earth's surface, according to USGS, the movement was enough to awaken some southern Californians.

"It felt like two quick jolts," said CNN's Rosalina Nieves. "I felt some shaking, and I wasn't sure if it was just my upstairs neighbor ... but then you definitely felt two quick jolts." She said the movement lasted for a couple of seconds.

While earthquakes are common in southern California, Nieves, a native of Los Angeles, said recent earthquakes in Chile and Haiti have caused concern.

"The first thing that jumps into your mind is, 'Is this the big one?'" she said.