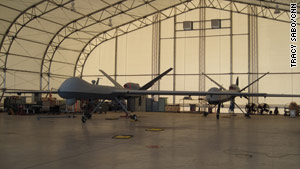 Predator B unmanned vehicles wait to be deployed inside a hangar at Fort Huachuca, Arizona.

See how the Border Patrol is using the latest in technology to spot suspected illegal immigrants on "The Situation Room with Wolf Blitzer," today at 5 p.m. ET.

Fort Huachuca, Arizona (CNN) -- It's a frigid, dark night in the mountainous border region of southeast Arizona. A group of 31 suspected illegal immigrants are walking up and down rocky ridges toward Tucson, Arizona. They're wearing small backpacks and stop to rest every few minutes.

Jerry Kersey is the Customs and Border Protection agent in charge of this night's Predator mission. He and his two-man crew relay the information to Border Patrol agents from a small trailer 40 miles from the scene.

Kersey directs the agents on the ground, who are wearing night-vision goggles.

"Stop! Stop! They're to your right," Kersey firmly dictates over a radio transmission. "They must see you. The group is running."

Over radio headsets, you can hear the agents running through the rugged terrain.

Video: Drones are eyes in sky

"It makes them much more effective when we're able to say, 'Hey, this is a group. You need to come get these guys,' " Kersey told CNN during a recent night mission.

It's also the reason a growing chorus of lawmakers and politicians are calling on the office of Customs and Border Protection to dispatch more Predator aircraft to patrol the border regions.

Supporters of the idea say the Predator's multimillion-dollar price tag -- the camera alone can cost more than $2 million -- is worth it. The drone patrols remote areas of the border where ground agents don't have consistent access.

"They can be very useful in providing eyes in the sky to make sure that we keep America safe," said U.S. Rep. Henry Cuellar, a Democrat representing the Texas border town of Laredo. "This will be something that provides law enforcement extra support."

Right now, Predator aircraft monitor some border regions on a limited basis. Customs and Border Protection says it has six of the unmanned aircraft: There are three Predators in Arizona, two in North Dakota, and one is being tested for maritime anti-narcotics duty in Cape Canaveral, Florida.

The agency will get its seventh drone this spring. That one is expected to go to Corpus Christi, Texas. Right now, none of its drones fly over Texas, the agency said.

The pilotless Predator B can fly up to 240 knots (276 mph) at altitudes up to 50,000 feet, according to the Customs and Border Protection Web site.

But there are questions about safety. A federal government study reported that the Predator is prone to crashing.

"Serious safety and technical issues need to be addressed if the program is to be expanded domestically," a May 2008 congressional report said. "... It is noted that UAVs [unmanned aerial vehicles] suffer accident rates up to hundreds of times higher than manned aircraft."

In Arizona, since the drones started flying there in 2006, one Predator has crashed because of pilot error and another had a hard landing that caused damage. But David Gasho, the director of aviation operations at Fort Huachuca, says those problems have been worked out and the program is much safer now.

"When people's lives and property are at risk, we don't push the envelope," Gasho told CNN. "We've actually started accumulating a pretty good safety record compared to a wartime picture."

There are also logistical concerns in flying the aircraft all along the border regions. The Department of Homeland Security would have to coordinate with the Federal Aviation Administration to make sure the drones don't interfere with private and commercial aircraft.

And despite their high cost, the Predators do have limitations.

Just as Border Patrol agents moved in to capture the group of 31 suspected illegal immigrants, thick clouds moved over the mountains at the worst possible moment. The Predator's camera view of the scene was lost.

As ground agents asked for more directions to reach the running suspects, the agents controlling the Predator could no longer tell them where to go.

The Border Patrol did manage to capture 18 of the suspects, but 13 others got away.

Jerry Kersey cursed a little but took it in stride. It's part of the job.

"You got elements out there you can't control," he said, but tomorrow is another day, and we'll be right back at it, trying to get more."