The Iditarod is on, mon! 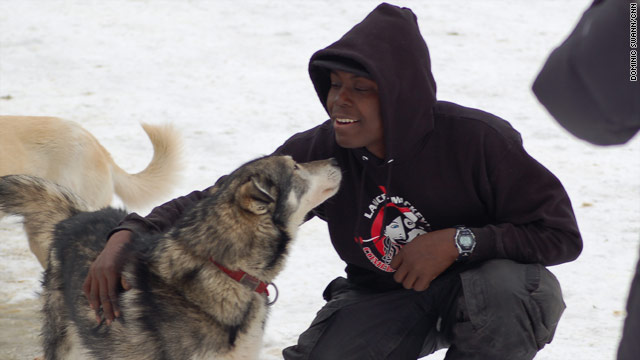 Anchorage, Alaska (CNN) -- It's the world's most famous sled dog race, a feat of endurance for mushers and dog teams who must travel across 1,049 miles through some the most unforgiving and extreme terrain on the planet.

It is the Iditarod. Organizers call it the "Last Great Race on Earth," and only the toughest mushing teams and survivalists need apply.

First-time Iditarod musher Newton Marshall was seen this week taking care of 17 dogs in a hotel parking lot in Anchorage, Alaska. Each dog was chained to Marshall's borrowed kennel pickup, several of them barking to regain their leader's attention.

Marshall, 26, is among 22 rookies on the 2010 Iditarod starting roster of 71 teams, but that's not the reason he made history as the ceremonial start to the race got underway Saturday.

"Hey, mon! ... I'm from Jamaica. I'm running the Iditarod!" Marshall exclaimed while performing the not-so-glorious task of cleaning up after his dog team.

Wait, WHAT? Did he just say Jamaica?

"They look at me and think I'm crazy," Marshall said with a chuckle. "I'm not supposed to be up here."

He knows critics are probably mocking him thanks to the hapless Jamaican bobsled team that debuted at the 1988 Winter Olympics in Calgary, Canada, but Marshall balks at any comparison.

"Bobsledding is nothing, mon, and they didn't make the Olympics this year, so hopefully we can do something," he said.

Marshall may be a rookie at the Iditarod, but he has successfully completed other mushing competitions since his career began in 2005. His longest race thus far brought a 13th-place finish (in a field of 29 competitors) in last year's 1,000-mile Yukon Quest International Sled Dog Race between Fairbanks, Alaska, and Whitehorse in Canada's Yukon Territory.

Marshall comes with financial backing and material support, as well. The Jamaican dogsled team, made up of rescued strays and performing dry-land sled dog rides in Ocho Rios, is financially supported by Jimmy Buffett's Margaritaville cafes.

Marshall has been training for the nine- to 10-day event with three-time Iditarod winner and defending champion Lance Mackey. He's beginning to sound just like Mackey, too, always giving the credit first to his dog team.

"These dogs run 12, 15 hours straight, nonstop, so these are really tough athletes," Marshall said. "They're one of the toughest athletes in the world."

Obviously, I don't really like the cold, you know, but I like running dogs.
--Newton Marshall, Iditarod musher

Video: The start of the 2010 Iditarod
RELATED TOPICS

Lead dog Larry is an Iditarod veteran, and Marshall's confidence in reaching the finish line depends heavily on the 9-year-old Alaskan husky.

So, how does a Jamaican explain leaving behind 80-degree temperatures for an Arctic winter in training?

"Obviously, I don't really like the cold, you know, but I like running dogs," he said. "As long as I'm warm, I'm happy with the dogs, and the dogs like to see when you're happy."

"Expect the unexpected. This is the big one, you know. The toughest race on Earth," he said.

He will not predict a winner.

"It's a surprise for everybody," he said.