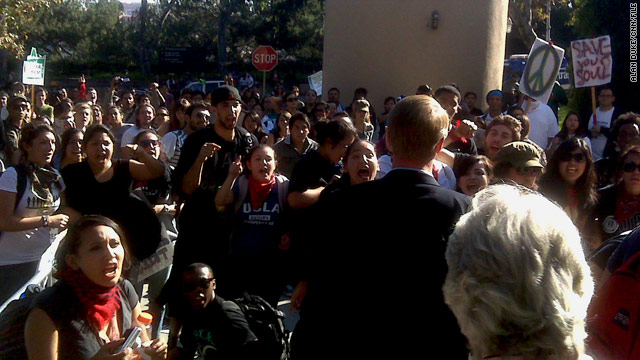 (CNN) -- Dissatisfaction, anger and an uncertain future have led professors and students in California and across the country to call for a day of action Thursday to defend education at state colleges and universities.

Budget cuts have resulted in canceled classes and class waiting lists doubling or tripling in California.

Whitney Thompson experienced this firsthand when all her courses at Fresno State University were dropped, setting her back an entire year. She is part of a rising phenomenon in which students take up to six years to graduate.

These "super-seniors," as they are referred to by the universities, have to take out more debt to carry the full-time load needed to maintain their financial aid and health insurance. She is now enrolled in classes that do not meet her graduation requirements.

"My plans were messed up, I now have more debt, and I'm taking classes that were my least choice," Thompson said.

Are you in on the protests? Share pics, video

Alejandro Laro-Briseno at the University of California, Berkeley, said he knows students who have to choose between buying a book and eating.

Honora Keller, a fifth-year student at San Francisco State University, has to work three jobs to keep up. "I have to eat, buy books and [pay] tuition, and I'm still taking out more loans," she said.

"People are taking semesters off to save for tuition. It's a common conversation you hear everywhere on campus," Keller said.

Similar conversations are taking place across the country as states slash funding not only for colleges, but also for elementary and secondary education.

That's why protests of various kinds are planned Thursday in at least 29 states. See where protests are planned

"There needs to be some honest conversations about what's happening [in our schools]," according to CNN Education Contributor Steve Perry, who founded Capital Preparatory Magnet School in Hartford, Connecticut.

"The system is being fleeced by the people within."

Perry said teachers' salaries make up 70 to 80 percent of schools' budgets. In order for school programs to survive, those salaries must be based on performance and revenue instead of union mandates, according to Perry.

Most of Thursday's protests will center on cuts to state-funded colleges and universities, which could translate into even higher tuition costs.

In Georgia, a legislative committee proposed $300 million in cuts to the state's college system, on top of $100 million cut in the past two years, University of Georgia President Michael F. Adams wrote in an open letter to students, faculty and staff.

"This is not our plan; these are not cuts we offered to make; and we will vigorously oppose any effort to implement them," Adams wrote.

In response, student organizers in Georgia are urging fellow students at every college in the state system to wear black this week to "symbolize the 'death' of our education," according to a posting on Facebook.

State funding for the California State University system was reduced by nearly $1 billion for the academic years between 2008 and 2010. Schools have responded by increasing fees, canceling classes, cutting student support programs and furloughing professors.

"The less affordable education becomes, the less likely low-income students will be able to get a college education," said Lillian Taiz, president of the California Faculty Association and professor of history at California State University, Los Angeles.

Alejandro Lara-Briseno -- the first in his family to attend college -- now doubts he will be able to finish. "I remember when I was accepted to the University of California, Berkeley, my mother started crying," he said.

"The university administration is not discussing with students or unions their decisions to cut recruitment and retainment centers that help minority students," he said.

More students take particular classes -- not because they are interested in the topic or even fulfilling their requirements -- but because they are unable to register for anything else, says Vivian Chavez, an assistant professor at San Francisco State University.

Furlough days and a 10 percent salary decrease have affected the morale of professors and students at San Francisco State University,

"We are doing more with less," Chavez said. "I normally teach 45 students and last semester I taught 68 students. It was so difficult to remember student names. How do you give each one individual attention?"

As students and professors prepare for Thursday, they face many challenges and obstacles but remain hopeful that administration and legislators will listen.

"I want people to question where the priorities are," said Honora Keller. "To see people getting together to accomplish a goal by creating awareness for something as simple and as basic as the right to be educated."