(CNN) -- SeaWorld will resume killer whale shows while the company and two federal agencies investigate the death of a whale trainer at SeaWorld Orlando, company and federal officials announced Friday.

The shows, which were suspended at all SeaWorld locations after the death Wednesday at SeaWorld Orlando, will resume Saturday with new precautionary measures in place, said Jim Atchison, president of SeaWorld Parks & Entertainment.

Earlier Friday, the Labor Department's Occupational Safety and Health Administration and the Agriculture Department's Animal and Plant Health Inspection Service announced they were looking into the death of Dawn Brancheau, 40.

Brancheau was pulled underwater when a killer whale named Tilikum grabbed her ponytail. A source at SeaWorld said that after seizing her, the whale dove deep underwater. Trainers eventually had to wrangle the animal into a smaller pool before they could retrieve her body about 40 minutes later.

A former head of animal training said Friday that Brancheau left herself vulnerable to attack and that she may have broken the park's training protocol. 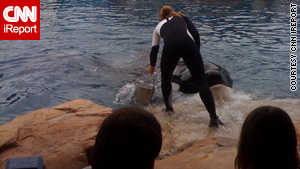 Trainer Dawn Brancheau interacts with a killer whale before Wednesday's accident at SeaWorld.

"Dawn, if she was standing here right now, would tell you that that was her mistake in allowing that to happen," said former SeaWorld trainer Thad Lacinak, who had worked with Brancheau in the past, on ABC's "Good Morning America."

Lacinak called Brancheau "one the best killer whale trainers I ever worked with."

Still, he said, Brancheau should not have been lying in a slideout -- a platform covered by roughly 4 inches of water -- so close to a killer whale.

"When I was there we did have a protocol that you would not do that, you would not lie down in a slideout and get that close to his mouth.

"Now, whether she broke that protocol or not I don't know, or if the protocol changed in how they were working with him," Lacinak continued. "But I'm pretty sure it was her breaking the protocol."

Atchison said Friday that it's too soon to tell if Brancheau violated protocol.

"It's far too early to get to that point," the SeaWorld president said. "We're really still trying to collect information, trying to understand the nature and scope of the event."

He declined to discuss SeaWorld's training protocols, saying they are "proprietary documents."

Atchison had high praise for Brancheau and said a charitable foundation is being formed to support causes she was interested in.

He told reporters that video images in connection with the accident have been made available to the appropriate authorities.

Atchison said Tilikum "is a wonderful animal" and "will remain an active and contributing member of the team despite what happened."

"He's a very special animal that requires special handling. Obviously the procedures that we've had in place are something we're revisiting at this point," he said.

Tilikum's size and weight -- 12,000 pounds, compared with 6,000 to 9,000 pounds for the facility's other killer whales -- was one reason there were separate procedures in place for him at the Orlando facility.

Various other improvements and changes will be enacted, Atchison said.

Labor Department spokesman Mike Wald said the safety and health agency is looking into whether OSHA workplace standards were violated in the incident. It will complete a report within six months, he said.

If workplace infractions are found, OSHA will propose financial penalties, Wald said. If that happens, the company could accept the penalties and make any necessary workplace changes or appeal proposed penalties before an OSHA review commission.

The Animal and Plant Health Inspection Service wants to know if there were any violations of the Animal Welfare Act, a federal set of minimum-care standards for entities that get USDA licenses, including facilities that exhibit warm-blooded mammals to the public.

Sacks said the incident will trigger a "focused" investigation, in which inspectors will go to SeaWorld to gather facts. If they think any welfare-act violations contributed to the incident, a formal investigation will begin.

Such violations could trigger fines and even license suspensions and revocations.

"If we feel animals are suffering, we can confiscate the animal," Sacks said. He said SeaWorld Orlando has never been the object of a penalty enforcement.

"We need to evaluate our safety procedures and how we interact with these animals," he said, and he stressed that it's "extremely important that we continue to take care of these animals the best way possible."

The same whale was linked previously to two other deaths.

Tilikum and two other whales were involved in the drowning of a trainer at a Victoria, British Columbia, marine park in 1991. The trainer fell into the whale tank at Sealand of the Pacific and was dragged underwater as park visitors watched.

Nancy Black, a marine biologist who has studied whales for 20 years, said Tilikum could have been trying to play with Brancheau or get her attention or companionship.

Such whales play with seals and sea lions in the wild, tossing them in the air, she said, but end up letting them go. But she said the whale could also have been frustrated for some reason.

The incident raises larger questions about the captivity of wild animals. People for the Ethical Treatment of Animals said dolphins and other sea animals in aquariums "routinely die prematurely of stress and other captivity-related causes," and human casualties also occur.

The incident occurred about 2 p.m. Wednesday. Tompkins said the whale had just finished a session with Brancheau, who was leaning over and rubbing his head. They were in knee-deep water, he said.

"She had a long ponytail that brushed in front of her and apparently got in front of his nose," Tompkins said. "He probably felt it."

Tilikum grabbed the ponytail and pulled Brancheau into the water, he said. Rescuers were not immediately able to reach her because the whale was too aggressive, the sheriff's office said.

She was recovered by SeaWorld staff members after Tilikum was coaxed into a smaller pool and lifted out of the water by a large platform on the bottom of the smaller tank, authorities said.

Brancheau had wanted to be an animal trainer from the time she visited SeaWorld as a 9-year-old, her sister Diane Gross said.