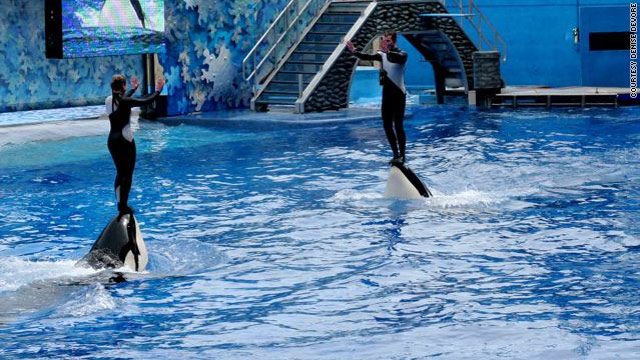 Trainers at SeaWorld are taught to reinforce the whales' good behavior with rewards and to not react at all to bad behavior.
STORY HIGHLIGHTS

(CNN) -- Killer whales can weigh up to 22,000 pounds, and may be as long as 32 feet, according to the National Oceanic and Atmospheric Administration. They often travel in groups of up to 50, being highly social.

Confining such an enormous animal in an aquarium tank leads the animal to display neurotic behavior, experts say.

An orca can travel easily 100 nautical miles every day, and to put them in a pool where they swim around in circles continually, and kept away from their families, "takes a toll on their brains," said Jim Borrowman, who has worked with whales for 30 years and runs Stubbs Island Whale Watching on Vancouver Island, British Columbia.

"'Neurotic' is the word that we've used, and I sense that that's probably what's happening," he said. "Perhaps that's what drives some of these issues."

Tilikum, weighing about 12,000 pounds, has been linked to two other deaths -- he and two other whales were involved in the drowning of a trainer at a Victoria, British Columbia, marine park in 1991. Authorities said in 1999 that a 27-year-old man was the apparent victim of Tilikum's "horseplay" at SeaWorld.

Whales are dangerous in captivity because of their tremendous size, experts said.

Annette Eckis Godsey, the victim of a 1972 incident, had to have 200 stitches from the waist down when a killer whale attacked her at the aquarium where she worked, she said on CNN's "Larry King Live." She said she didn't know why it happened, but "heard later that no one had ever ridden the whale without a wet suit, and no women had ever ridden the whale."

"Things that we've never heard or seen in the wild are happening in aquariums," Borrowman said.

"In the wild, killer whales have never been known to attack a human," said Kim Parsons, independent whale biologist from Seattle, Washington. "But they do play with, and/or kill, other species."

Trainers at SeaWorld are taught to reinforce the whales' good behavior with rewards and to not react at all to bad behavior, a technique developed by influential psychologist B.F. Skinner, said Dr. Jeffrey Ventre. Skinner's ideas fall under the psychological framework of operant conditioning.

"You don't defend yourself, in fact you're trained to do the exact opposite," said Ventre, who worked at SeaWorld for 8 years and had been a senior trainer there, on the same level as Brancheau.

Spectators who had attended the whale show before Brancheau was killed reported that the whales were not behaving -- "they weren't following instructions," Lori Miller, SeaWorld visitor, said.

This suggests that the whales had something going on socially among themselves, Ventre said.

"It's probably reasonable to suspect that something going on amongst the whales themselves may have triggered the frustration," he said. But, he added, it is "impossible to speculate what triggered the aggression."

Parsons added that perhaps the whales involved in harming humans were taking advantage of the opportunity to interact with novel stimuli in a habitat that is otherwise fairly mundane.

Although Tilikum is the largest of the whales in his group, he is also the most vulnerable to bullying from the others because there is less room for him to maneuver, Ventre said.

"The SeaWorld system is the best of all seaquaria in the world, but if I was an orca, that would be the last place I'd want to live," he said. "They are in what is essentially an acoustically dead cement pond, compared to the vibrancy of the ocean."

Animal rights groups such as People for the Ethical Treatment of Animals, or PETA, said killer whales should not be kept in aquariums to begin with.

"These are very dangerous animals, and being in captivity, they're ticking time bombs," said Debbie Leahy, director of PETA's Captive Animals and Entertainment Issues Department. "These animals become very depressed and neurotic in captivity, whereas in the wild they avoid human contact."

But Borrowman cautioned that it's hard to know what would happen if all aquarium whales were released into the ocean, especially those that were born in captivity. Tilikum, who was caught in Iceland in the 1980s, could potentially, for example, turn over a person in a kayak, Borrowman said. Ventre added that the captive whales may or may not survive if released.

There are already a lot of safety precautions in place, and only the most experienced trainers get to do the water work, Ventre said.

Ventre speculated that there may be more restrictions placed on who can work with the whale, but it's unclear whether much can be done -- someone still has to feed Tilikum 300 pounds of fish a day, administer medication and perform other daily tasks with the animal. Tilikum is also part of an artificial insemination program, which means someone has to roll him over and extract sperm from him.

"This is one of the inherent risks of working with animals like orcas or elephants, or walruses or even California sea lions," he said. "This kind of stuff happens."