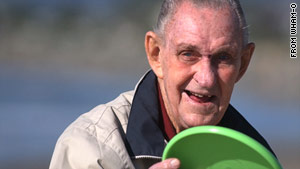 (CNN) -- Some mourners may bring Frisbees to Saturday's memorial service for Walter Fredrick "Fred" Morrison, who invented the flying disc.

Morrison, 90, died this week at his home in Utah, said Jen Derevensky, a spokeswoman for Wham-O, the company that has sold the Frisbee since signing a contract with Morrison in 1957.

"Fred's the one who thought of commercializing something that people had been doing forever -- picking up a round, flat object and watching it sail," said Phil Kennedy, Morrison's biographer.

"It's so simple that anyone could pick it up and fly it acceptably well in a few minutes," Kennedy said. "It's inexpensive and adaptable to existing games and to new games."

Morrison started experimenting with flying disc designs in 1937 after his girlfriend's uncle invited him outside to toss the lid from a popcorn tin, according to Wham-O.

Later, Morrison borrowed a cake pan from his mother's kitchen to throw with his girlfriend, who later became his wife. He was soon hawking "Flyin' Cake Pans" for 25 cents on beaches and parks around Los Angeles, California.

A fighter pilot during World War II, Morrison was shot down and held as a prisoner of war for 48 days, according to Wham-O.

After the war, Morrison became a carpenter, drawing up plans for aerodynamic discs in his free time. His plastic Flyin-Saucer was a commercial flop, but the better-designed Pluto Platter sold well enough to attract the attention of the Southern California-based Wham-O, which soon would begin selling the Hula Hoop.

"The Pluto Platter was more aerodynamic, with more weight in the rim," Kennedy said. "It was sleeker -- without ribs sticking up -- and a little bigger, so it flew better."

Morrison had been in declining health and died Tuesday, Derevensky said.

Saturday's memorial service will be at a restaurant near his home.