With stadium about to fall, is now the time to dig into Hoffa legend? 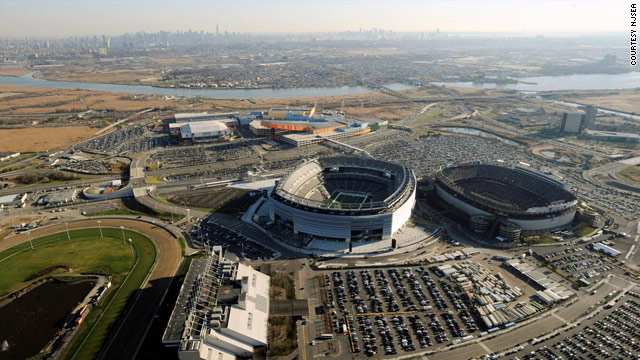 Giants Stadium, right, is coming down, with New Meadowlands, left, taking its place. Some say the Hoffa legend needs to go, too.
STORY HIGHLIGHTS

New York (CNN) -- What do the New York Giants and Jets have in common with Jimmy Hoffa? Not much, unless you buy into the long-festering urban legend that they all shared the same residence in East Rutherford, New Jersey.

But now, the two football teams are headed to a new $1.6 billion facility nearby dubbed the New Meadowlands. And their departure may be the best opportunity to finally put to rest the endless stories that Hoffa is not "swimming with the fishes" in the swamps of New Jersey. Or is it?

The old stadium, which opened in 1976 and is often referred to as Giants Stadium, is being razed, with demolition beginning Thursday.

Urban lore has it that Hoffa, the long-missing Teamsters leader, was killed by members of organized crime and buried in the end zone, or thereabouts, in Giants Stadium.

Representatives for the New Meadowlands stadium said that the field won't be dug up, but that the stadium will be torn down in large pieces and the land eventually will be a parking lot.

Is it possible that football and soccer players -- not to mention the hundreds of thousands of fans who have visited the stadium for concerts over the years -- have trod near the former union leader?

Few urban legends continue to capture the imagination like the disappearance of a union boss with a murky past. The story is now a traditional butt of comedians' jokes, and one shouldn't be surprised that in 2004, the show "Mythbusters" devoted a segment searching for Hoffa. Several areas of the field were tested, but nothing was found. Conclusive? Perhaps not. If you listen closely, you can hear Geraldo Rivera kicking himself for not doing an hourlong special.

A Google search of "Jimmy Hoffa" reveals many theories and opinions on the whereabouts of the controversial union leader, who was reportedly last seen in a suburban Detroit restaurant.

Hoffa skipped off to Brazil with a "go-go dancer" one union official swore. The Weekly World News claims NASA's Hubble Space Telescope has revealed Hoffa's body in a large hidden compartment with a special concrete block. "Crushed in automobile compactor" and "Ground up at a meat processing plant and dumped in Florida" are some of the other theories. Director Quentin Tarantino must be excited about the possibilities.

So just how did Hoffa supposedly end up in the end zone of a football stadium in New Jersey? According to one account, his body was mixed into concrete that was later used to construct the stadium. But why does this story seem to resonate and remain one of the top theories?

Jeff Hansen, an author and former Detroit police officer, says the rumors probably linger because the stadium is a well-known landmark. "It's the NFL," he said. "It's construction, organized crime and cement. Everyone wants to play on that."

Hansen did his own research, and in his recently released book "Digging for the Truth: The Final Resting Place of Jimmy Hoffa," he says the union leader was probably killed closer to home in Michigan and disposed of in a crematorium.

John Samerjan is vice president of public affairs at the New Jersey Sports and Exposition Authority, which oversees the Meadowlands Sports Complex. He says he's heard it all before, and he dismisses the story by saying, "It's a complete urban myth."

"There was this mob lore that the mob dumped bodies in the weeds before the stadium was built. The meadowlands region was 'the weeds.' No one has taken this seriously," he said. "It would often come up because every so often, a mobster would write a book or a magazine article. I was here eight years ago when the calls came flooding in."

The rumor mill was so out of control then that a former publicity official recalled recently that the stadium posted a "He's not here" message on its electronic billboard outside the stadium.

The FBI office in Detroit says the investigation of Hoffa's disappearance is ongoing. "We follow up on leads," Detroit FBI spokeswoman Sandra Berchtold said.

The FBI office in Newark, New Jersey, doesn't plan to send anyone to the stadium when it's torn down. "Nope" was the response from Newark FBI spokesman Brian Travers, who says he's fielded several recent calls from the media about the matter.

"My question to you," Travers replied about the seemingly lunacy of the question, "is why would anyone think we would wait this long. We would have dug up the 50 yard line during the Super Bowl a long time ago if there was any credence to the rumor."

The issue of digging is very sensitive for New York sports fans. During the construction of the new Yankee Stadium, a construction worker, and Red Sox fan, buried a Red Sox jersey in wet concrete, hoping to hex the Yankees. The Yankees spent thousands of dollars to dig up the jersey and, in doing so, perhaps averted a future curse and urban legend.