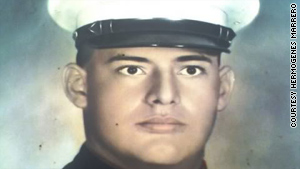 Hermogenes Marrero, as a young U.S. Marine, was stationed on the island of Vieques nearly 40 years ago.

Hear from residents of Vieques, where thousands of people say U.S. weapons testing has made them seriously ill, on tonight's "Campbell Brown," 8 ET

Vieques, Puerto Rico (CNN) -- Nearly 40 years ago, Hermogenes Marrero was a teenage U.S. Marine, stationed as a security guard on the tiny American island of Vieques, off the coast of Puerto Rico.

Marrero says he's been sick ever since. At age 57, the former Marine sergeant is nearly blind, needs an oxygen tank, has Lou Gehrig's disease and crippling back problems, and sometimes needs a wheelchair.

"I'd go out to the firing range, and sometimes I'd start bleeding automatically from my nose," he said in an interview to air on Monday night's "Campbell Brown."

"I said, 'My God, why am I bleeding?' So then I'd leave the range, and it stops. I come back, and maybe I'm vomiting now. I used to get diarrhea, pains in my stomach all the time. Headaches -- I mean, tremendous headaches. My vision, I used to get blurry."

The decorated former Marine is now the star witness in a multibillion-dollar lawsuit by more than 7,000 residents of this Caribbean island -- about three-quarters of its population -- who say that what the U.S. military did on Vieques has made them sick.

Read: Are Americans being forgotten on Vieques?

For nearly six decades, beginning right after World War II, Vieques was one of the Navy's largest firing ranges and weapons testing sites.

After years of controversy and protest, the Navy left Vieques in 2003. Today, much of the base is demolished, and what's left is largely overgrown. But the lawsuit remains, and island residents want help and compensation for numerous illnesses they say they suffer.

"The people need the truth to understand what is happening to their bodies," said John Eaves Jr., the Mississippi attorney who represents the islanders in the lawsuit.

Because he no longer lives on Vieques, Marrero is not one of the plaintiffs but has given sworn testimony in the case. He said the weapons used on the island included napalm; depleted uranium, a heavy metal used in armor-piercing ammunition; and Agent Orange, the defoliant used on the Vietnamese jungles that was later linked to cancer and other illnesses in veterans.

"We used to store it in the hazardous material area," Marrero said. It was used in Vieques as a defoliant for the fence line.

The military has never acknowledged a link between Marrero's ailments and his time at Vieques, so he receives few disability or medical benefits from the Department of Veterans Affairs.

Neither the Navy nor the Justice Department, which is handling the government's defense, would discuss the islanders' lawsuit with CNN.

But Eaves said his clients don't believe that the military has fully disclosed the extent of the contamination on Vieques: "Like uranium was denied, then they admitted it."

Dr. John Wargo, a Yale professor who studies the effects of toxic exposures on human health, says he believes that people on the island are sick because of the Navy's bombing range.

Vieques ... is probably one of the most highly contaminated sites in the world.
--Dr. John Wargo
RELATED TOPICS

"Vieques, in my experience of studying toxic substances, is probably one of the most highly contaminated sites in the world," he said. "This results from the longevity of the chemical release, the bombs, the artillery shells, chemical weapons, biological weapons, fuels, diesel fuels, jet fuels, flame retardants. These have all been released on the island, some at great intensity."

Wargo is the author of a new book, "Green Intelligence," on how environments and toxic exposure affect human health. He is also expected to testify as an expert witness in the islanders' lawsuit.

He said the chemicals released by the munitions dropped on Vieques can be dangerous to human health and may well have sickened residents or veterans who served on the island.

The effects of those chemicals could include cancer, damage to the nervous, immune and reproductive systems or birth defects, he said.

"This doesn't prove that the exposures caused those specific illnesses," Wargo added. "But it's a pretty convincing story from my perspective."

Since the Navy left the island, munitions it left behind "continue to leak, particularly from the east end of the island," Wargo said.

"My concerns are now predominantly what's happening in the coastal waters, which provide habitat for an array of fish, many species of which are often consumed by the population on the island," he said.

Scientists from the University of Georgia have documented the extent of the numerous unexploded ordinance and bombs that continue to litter the former bomb site and the surrounding waters. The leftover bombs continue to corrode, leaching dangerously high levels of carcinogens, according to researcher James Porter, associate dean of the university's Odum School of Ecology.

The Environmental Protection Agency designated parts of Vieques a Superfund toxic site in 2005, requiring the Navy to begin cleaning up its former bombing range. The service identified many thousands of unexploded munitions and set about blowing them up. But the cleanup effort has further outraged some islanders, who fear that more toxic chemicals will be released.

The U.S. government's response to their lawsuit is to invoke sovereign immunity, arguing that residents have no right to sue it. The government also disputes that the Navy's activities on Vieques made islanders ill, citing a 2003 study by scientists from the Centers for Disease Control and Prevention that found no link.

That study, however, has been harshly criticized by numerous scientists, and the CDC is embarking on a new effort to determine whether residents may have been sickened by the contamination from the Navy range.

Asked whether his duty on the island made him sick, Marrero responds, "Of course it did."

"This is American territory. The people that live here are American," he said. "You hurt someone, you have to take care of that person. And the government's just not doing anything about it."