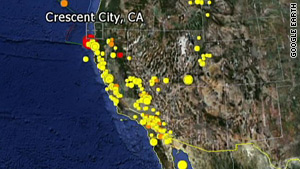 The quake ran about 10 miles deep in northern California, near Eureka.

(CNN) -- A 6.5-magnitude earthquake has struck off the shore of Northern California, leaving thousands of households without power.

About 28,000 customers, most of them in Humboldt County, were left without power Saturday evening, said Jeff Smith, spokesman for Pacific Gas and Electric Co. One gas leak in the county was also reported.

He said utility crews were patrolling the area to restore power.

There were no immediate reports of serious injuries or damage, according to local authorities and the U.S. Coast Guard in Humboldt County. St. Joseph's hospital confirmed one person being treated for a broken hip and several others arriving with bumps and bruises from the earthquake.

Nearly a dozen aftershocks followed, the strongest at 4.5 magnitude.

Calls from concerned citizens were pouring into police and fire departments. Gary Bird, spokesman for the 28,000-population Eureka, said 25 responders were surveying the scene.

"We've got isolated water line breaks, power lines down, broken windows, unreinforced buildings that had some bricks fall off into the street," he said, adding that residents have been asked to stay inside.

Chris Durant, a reporter for the Times-Standard of Eureka, said he was working on the second floor of the newspaper's concrete building when he and his colleagues felt the quake.

"We are used to feeling small ones," he said, "but after the first few seconds, we looked at each other and said this is not a small one."

He said small chunks of plaster peppered the floor. Still, he said reports from the area indicate minor damage.

"[There's] not as much as you might think with a 6.5," he added, describing much of the damage as broken glass on storefronts and tiles on floors and ceilings popping.

"People are standing outside and talking with their neighbors, and, kind of like letting their nerves calm down," he said.

iReporter Andrew Parent of Eureka was driving home from work when he saw people running out of their homes and power lines down.

He rushed home to find a state of disarray -- dishes everywhere, a bookshelf toppled over.

"The fridge moved. Everything moved," said parent, 20. "I guess it's not really a big deal, but it was kind of scary."

Eureka resident Cole Machado told CNN he was talking on the phone when he felt the ground shake.

"I thought my TV was going to fall over."

He said the power cut out for a few seconds and there were reports of downed phone lines and broken windows in the the nearby town of Ferndale, which is 27 miles away from the quake's epicenter.

Ferndale Fire Chief Tom Grinsell said it was "one of the strongest quakes I remember in quite a while. I assumed it was going to be a lot worse than we're seeing."

He said his department has received numerous calls about broken glass, emptied shelves, and stucco and plaster knocked off walls. However, he added that the damage is cosmetic and that no buildings have collapsed.

Grinsell said officials have asked residents to stay off the roads because of debris and to conserve water until it's certain there is no damage to the water system.

There was no tsunami warning issued.

A 6.5-magnitude quake is considered a "strong" temblor, according to CNN meteorologist Jacqui Jeras, who noted that about 120 are recorded worldwide each year.

Dave Magni, owner of the Ivanhoe Hotel in Ferndale, said, "We are sitting in a sea of booze" after the quake. He felt an aftershock while talking with CNN. "My employees are out in the parking lot right now," he added.