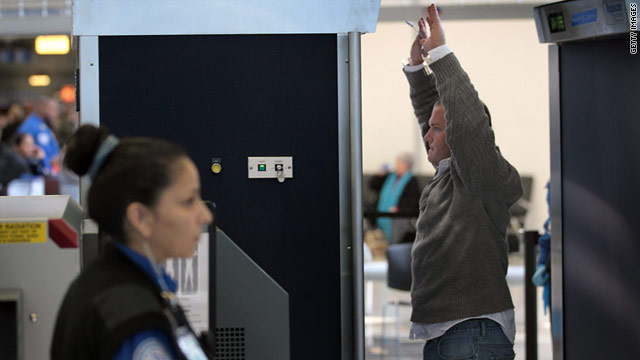 An airline passenger submits to a full-body scan. A commercial pilot recently posted a video on the web that showed the contrast between the passengers, who were heavily scrutinized, and airport employees who just passed through a single door.
STORY HIGHLIGHTS

(CNN) -- The leadership of San Francisco's airport fired back Saturday at critics who had rallied around a commercial pilot who had posted videos online showing what he described as shortcomings in security.

The series of videos featured scenes from inside the San Francisco International Airport (SFO) and were narrated by the pilot, who pointed out the contrast between the passengers, who were heavily scrutinized, and airport employees who just passed through a single door.

"A recent YouTube video, posted by a U.S. airline pilot, presents false and misleading information on SFO's security program," the airport said in a statement. "The video shows a door with a card swipe and suggests that access is gained to the airfield area through this door. In fact, the door shown in the video provides access only to an employee lunchroom."

The pilot who posted the videos requested anonymity because of the sensitivity of the issue.

"I was trying to bring up the obvious, ludicrous TSA-type of security," he told CNN.

The pilot said he didn't think much about posting his videos online in late November, but that within a matter of days his chief pilot called him to ask him to remove them because they were "stirring a commotion."

In its statement Saturday, the airport defended its practices, stressing that there are variances in the security system based on various factors and that many layers of protection cannot easily be seen.

"Proper and effective security requires multiple layers of systems, procedures and policies that are interlaced and constantly monitored," the airport said. "The vast majority of the widespread layers of this security program are behind the scenes and transparent to casual observers."

A few days after the pilot posted the videos, he said, the Transportation Security Administration told him he was being suspended from the Federal Flight Deck Officer program. As an officer in that program, the federal agency had deputized him, among others, to carry a handgun in the cockpit.

The pilot said four air marshals and two local deputies then showed up at his home near Sacramento to personally confiscate his weapon.

The only answer he could get from the security agency as to why he was suspended from the program was that he may have violated a regulation, the pilot said.

The TSA said that it holds those serving as federal flight deck officers to "the highest ethical standards," and said it took action because the pilot was in the program.

"(Participants in the flight deck officer program) must be able to maintain sensitive security information," said the agency's spokeswoman Sarah Horowitz. "As the issuing authority of credentials and firearms, TSA reviews each possible violation of those standards and acts accordingly up to and including removing an individual from the assigned role."

In the aftermath of the incident, the pilot said he resigned from the program. He added that he didn't consider that divulging such sensitive information online would stir controversy.

"I didn't think anything would come of it," said the 50-year-old pilot, a veteran who was a maintenance test pilot.

"This is really about getting the message out and demanding intelligent security," Don Werno, the pilot's attorney, told CNN. "No state secrets are being shown here. What's being shown here is a lack of security."

But the airport disagrees.

"San Francisco International Airport is proud to both an innovator and a trendsetter in aviation security," it said in its statement. "SFO meets, and in many cases, exceeds every federal security requirement."