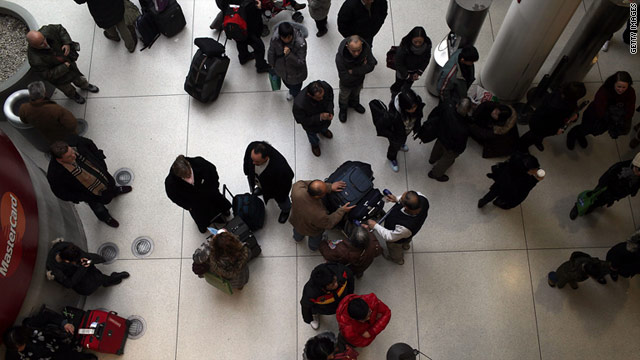 The mid-Atlantic and Northeast U.S. could see combinations of rain, sleet and snow on Christmas Eve and Christmas Day.
STORY HIGHLIGHTS

(CNN) -- Delta Air Lines has pre-emptively canceled approximately 500 Christmas Day flights, a company spokesman said Friday, as it and other U.S. airlines work to get ahead of a storm that's threatening the East Coast.

Morgan Durrant, a Delta spokesman, said Friday that the airline has canceled roughly 300 flights in and out of Atlanta and 200 more elsewhere around the country.

Delta also has joined Continental, United, American and AirTran in waiving penalties for travelers who have to reschedule their trips over the weekend.

The mid-Atlantic and Northeast could see combinations of rain, sleet and snow, with the heaviest amounts of precipitation in highest elevations, CNN meteorologists said. Still, forecasters on Friday noted considerable uncertainty as to the shape, the direction and the strength of the system.

By Friday evening, National Weather Service forecasters were predicting that an intensifying low-pressure system should hit Saturday night off the Carolinas coast and barrel northward toward Cape Cod, Massachusetts.

In parts of West Virginia, light snow starting Friday night was expected to give way to a "prolonged snow shower event" on Saturday night into Monday, the weather service said. Two to five inches could fall every 12-hour period in mountainous areas.

A hazardous weather outlook was issued from Massachusetts south down the East Coast through New York, New Jersey, Delaware and into Maryland.

The New York metropolitan area has a 40 percent chance of precipitation, which was expected to start after noon and fall as snow. While the accumulation there was expected to be fairly minimal, the weather service noted that a shift in the storm's track could mean "significant wind-driven snowfall to the entire region."

In addition, winds could gust as strong as 50 mph for eastern Connecticut and New York's Long Island.

Beginning Sunday afternoon and through Monday, southern New England could see six to eight inches of snow -- with 10 inches possibly falling in some locales. In addition, the National Weather Service cautioned about a coastal flood threat for eastern Massachusetts during high tides.

While the storm's path remained uncertain, airlines worked to get ahead of it by cancelling flights and adjusting restrictions and fees for those who changed their travel schedules.

United Continental Holdings Inc., parent company of United and Continental airlines, said that "customers scheduled on flights to, from or through the impacted areas may reschedule their itinerary with a one-time date or time change, and the change fees will be waived."

For canceled flights, "a refund in the original form of payment may be requested," it said.

Mike Trevino, a United Airlines representative, confirmed that United will issue a waiver for customers traveling Saturday through Monday to areas affected by weather.

"Customers will not be charged a change of ticket fee. No flights have been canceled in advance of the storm," he said.

The offer applies to travelers with tickets purchased on or before Thursday and going to, from or through airports serving Newark, New Jersey; New York City, Philadelphia, Pittsburgh, Boston, Washington, Baltimore and Atlanta.

Delta is offering customers whose flight plans may be affected by winter weather across the Southeast and East "the ability to make one-time changes to their travels schedules without fees. Delta's weather advisory encourages customers to consider postponing or rerouting their travel to avoid possible inconvenience from expected flight delays."

Customers "booked on Delta-ticketed flights to, from or through" several cities "may immediately rebook for travel before or after their original travel dates as long as new flights are ticketed and rescheduled travel begins by Dec. 29."

AirTran is also waiving penalties for passengers traveling to and from Atlanta from 2 p.m. Saturday to noon Sunday, and on Sunday and Monday for some cities "as long as travel is completed within three days from the date of the original scheduled departure date or five days after the original scheduled departure date, based on space availability, without fees or fare adjustments."

American Airlines, too, will allow its customers set to fly December 26 and 27 in and out of certain destinations to change their tickets free of charge. The policy applies to airports in Boston, Washington, New York, Newark and Philadelphia.