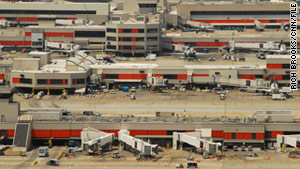 The men were handed over to two federal agencies -- Customs and Border Protection and Immigration and Customs Enforcement, Allen said.

The men were illegal immigrants, said ICE spokeswoman Barbara Gonzalez. "None of those encountered were in secure areas of the airport, nor did they have access to those areas," she said.

Gonzalez said five of the men were from Mexico and one man was from El Salvador.

"Additionally, our investigation has revealed that none of these individuals had any ill intent" against the United States, Gonzalez said.

The security operation took place outside a cargo facility that has no connection to any airport terminals, and the sweep was part of a routine exercise carried out randomly at various transportation hubs, Allen said.

"We conduct thousands of these across the country on a regular basis. This particular operation was targeted to facilities carrying cargo," he said.

Agents were using a three-tiered method, including an X-ray machine, radiological detection equipment and bomb-sniffing canine teams, he said. "Finding individuals in the back of the truck was not expected."