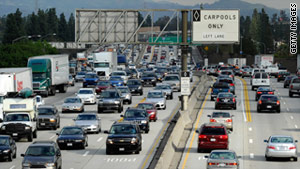 Traffic backs up on a freeway near Los Angeles during the Thanksgiving holidays.
STORY HIGHLIGHTS
RELATED TOPICS

(CNN) -- Americans traveling to see family and friends during the upcoming holiday season will have more company on the roads and in the skies, according to projections by AAA.

"After a challenging year in 2009, a modestly improved economic environment and pent-up demand resulted in more Americans traveling in 2010, and the year-end holidays are no exception," a AAA statement said.

The average distance for travel is expected to increase by 33%, the number of air travelers by almost 3% and median spending about 3.5%, to $694, AAA said.

"This is the fifth consecutive holiday period this year in which AAA has predicted a year-to-year increase in the number of travelers," Glen MacDonell, director of AAA Travel Services, said in the statement.

In addition, AAA said, airfares are expected to be 3% less than last year, with an average lowest round-trip rate of $174 for the top 40 U.S. air routes. Weekend daily car rental rates will hold steady at an average of $50, the group said.