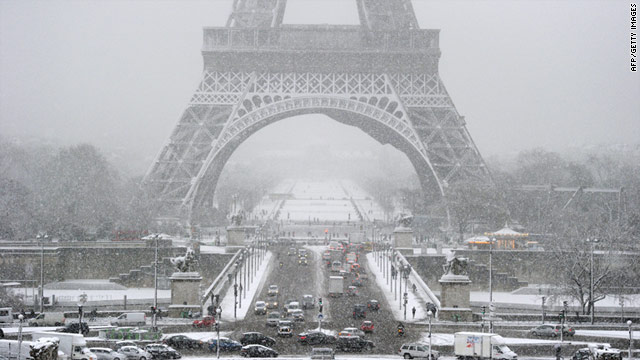 The relentless snowfall shut down traffic on the A31, a major highway, which prompted the closing of the border. The severe weather also forced German officials to cancel 239 flights and order a four-hour shutdown of the Frankfurt airport.

German's second largest airport, in Munich, announced the cancellation of 51 flights, most of them resulting from canceled flights at other airports.

The border closing and flight cancellations come a day after heavy snow paralyzed travel in the Paris region, where officials suspended air traffic at one of Europe's busiest airports, closed several highways and shut down the Eiffel Tower.

The tourist attraction reopened Thursday as officials downgraded a weather warning for central France from orange to yellow.

French police urged motorists to avoid driving unless absolutely necessary to get to work. However, Gérard Gauzet, director of Paris motorways, said Thursday morning that "traffic should be back to normal by mid-afternoon."

The Paris Metro is also running smoothly, but weather continues to delay some bus traffic, which was completely shut down by snow on Wednesday.

At Charles de Gaulle airport, "air traffic is almost back to normal," according to an airport spokeswoman.

"However, passengers should be prepared for delays and cancellations depending on the airline," the spokeswoman said. Snowfall shut down air traffic for several hours in the afternoon Wednesday.

The Wednesday traffic jams in the Parisian metro area set a new record. According to the National Center for Highway Information, snarled traffic lined 420 kilometers of roadways around the capital.

Shelters opened in the region to take in stranded motorists, and many people reported spending the night in their offices after being unable to get home.

Some disruptions were also reported on the region's railways Wednesday, with the high-speed TGV trains limited to a speed of 230 kph instead of the usual speeds of up to 320 kph, and several trains were delayed.

Journalist Celine Martelet of radio station RMC told CNN affiliate BFM-TV on Wednesday she had been blocked on a highway near Paris for three hours.

"There's an incredible silence, not one noise," she said. "People are leaving their cars and trying to go on foot. I saw one man on skis, who was going to find his wife who was stuck in a traffic jam two kilometers away. He was going to help her get out of her car."