5 destinations to explore in Qatar 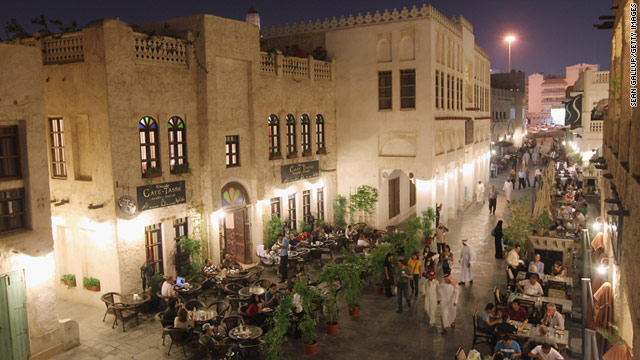 Tourists and locals dine in the Souq Waqif in Doha, Qatar. The Souq Waqif is among the capital's biggest tourist attractions.
STORY HIGHLIGHTS

(CNN) -- A lot of travelers probably had to get out the atlas Thursday when Qatar was named host of the 2022 World Cup tournament. A little-known destination, Qatar is a small Middle-Eastern nation with a population of less than 1 million. It borders the Persian Gulf and Saudi Arabia and promises hot and humid summers.

Qatar beat out bids from the United States, South Korea, Japan and Australia for the right to host the tournament.

Temperatures average about 95 degrees during the summer, but have been known to reach 120 degrees -- something that, along with sandstorms, could prove uncomfortable for fans.

But Qatar plans to build new stadiums and improve old ones, hoping to shield the players from the hot weather. The stadiums will include air conditioning, powered by solar panels.

Qatar is developing a public bus system, and visitors can also rent a car or hire a driver. And you'll want to get around -- Qatar has plenty to see aside from the best soccer in the world.

Lonely Planet suggests visiting these five places while in Qatar.

A road stretching 4 miles runs along the harbor in the capital city of Doha on Qatar's eastern coast. Aside from the beautiful Indian Ocean's waterfront and the dhows (traditional sailing vessels), visitors traveling along the road, Al-Corniche, will see some of the country's most innovative modern architecture.

The road has six lanes, but it is also possible to walk alongside the shoreline.

One of the main commercial areas of Doha, Souq Waqif has been undergoing a major makeover. Buying and selling has been taking place on the grounds of the market for centuries, and the shops have been remodeled to look like a 19th-century souq, with mud-rendered storefronts.

"Whether its Souq Waqif, Villagio - Doha's best mall, or the wholesale markets, there is something for everyone," said Lindsey Wallace, a travel agent at Linara Travel, which specializes in the United Arab Emirates. Don't forget to bargain.

Souq Waqif is one of the most traditional marketplaces in the city. Here, you can purchase spices, perfumes and garments, as well as handicrafts and local coffee.

Located up the coast from Doha, Al-Khor is a former pearl-fishing village and is much smaller than Qatar's capital city. There is a fish market in front of the harbor, and the beaches are pristine.

Visitors to Al-Khor can also go birdwatching in the mangroves and gardens of the city.

On the opposite coast of Qatar, Bir Zekreet is a great beach destination for those who like camping. The city is also surrounded by desert, which is where you'll find sand dunes and desert mushrooms.

Nearby are a wild deer reserve and an old movie set that looks like a deserted village.

You can drive along the dunes, ride camels or sand ski in this popular desert area.