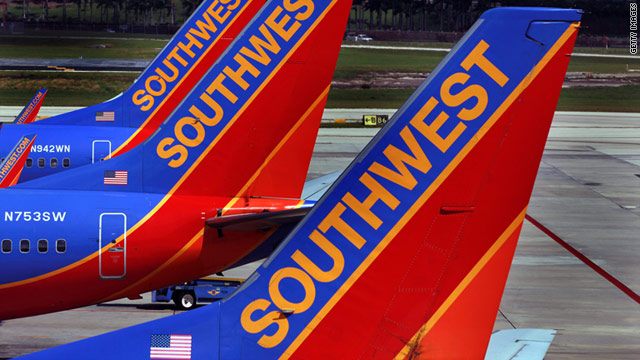 (CNN) -- There is one thing people seem to like about flying: Southwest.

In a new survey from Zagat, Southwest Airlines swept several satisfaction categories, including best value among domestic airlines for the third year in a row.

The airline also got nods for best luggage policy, best check-in experience, best consumer on-time estimates, and most eco-friendly -- the most top finishes of any airline.

"Customer service is the core of our business," said Whitney Eichinger, a spokesperson at Southwest.

"Bottom line, we have fun. Southwest takes our business very seriously, but is known for having employees who care about our customers which, in this industry, separates us from our competitors."

Eichinger added that Southwest will continue to offer customers the chance to check their first two bags free, a major draw for the airline since other popular carriers began charging up to $25 to check one bag.

The survey, conducted on Zagat.com, includes 8,000 opinions from frequent fliers and travel professionals, flying an average of 17 times per year. It covers 16 domestic airlines and 74 international airlines, as well as 30 airports within the United States.

Singapore Airlines was the top-rated international airline for both premium seating and economy seating, receiving a survey-high score of 28 out of 30 for its premium seats.

As for airports, Portland International topped the Overall Quality ratings with 22.47 out of 30, while New York's LaGuardia stayed at the bottom with 6.18 out of 30. This is LaGuardia's fourth year as America's least favorite airport.

"It's very, very crowded. ... They're having trouble keeping up with the traffic," said Tim Zagat, co-founder, co-chair and CEO of Zagat Survey. "I think a lot of the infrastructure is out of date."

In order to move up in the rankings next year, Zagat said they should "knock it down and start over."

Travelers said that direct routes were the most important factor when choosing a flight, followed by ticket price and past experience with an airline. Forty-five percent of people try to avoid flying airlines that charge for checked luggage.

"My bags get better service, but they pay extra," one survey respondent joked.