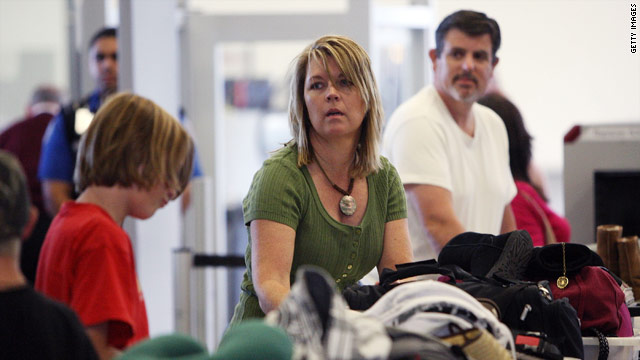 (CNN) -- As millions of Americans prepare to take to the skies for Thanksgiving travel, a U.S. official says security concerns have risen again because of an article published in an online magazine produced by al Qaeda in the Arabian Peninsula.

The latest issue of Inspire magazine gives detailed instructions on how to construct a toner cartridge bomb and encourages sympathizers to mount smaller, more frequent operations, the U.S. official told CNN on Tuesday.

Officials have said in the past that the recent cargo plot, the Christmas Day bomber and the heightened security threat in Europe also are reasons for concern. The Transportation Security Administration has imposed restrictions on toner cartridges on airplanes since the cargo plot was uncovered. U.S. officials would not comment on whether any specific threat led to enhanced pat downs.

The heightened concern comes at a time when airport security measures are under fire from frustrated travelers, pilots and lawmakers who say that some of the TSA's methods are too intrusive.

A backlash against full body scans and passenger pat downs has intensified over the past few days. Some are calling Wednesday "National Opt-Out Day," urging travelers who are selected for the full body scan using advanced imaging technology to refuse the procedure. While they have the right to refuse the scan, the pat-down alternative has created its own public furor.

A TSA official says the agency has now received "right about two thousand" complaints since new screening procedures went into full effect on November 1. About 2 million people go through screening each day.

TSA Administrator John Pistole told CNN Tuesday that the agency has worked with its screeners in anticipation of potentital delays caused by the "National Opt-Out Day."

"We have full-staffing regime so I think we're ready to deal with it the best way we can, but recognizing there's a certain unpredictability about all this," Pistole said.

"If people decide intentionally to slow down the process, that will have an adverse effect on people getting on their flight on a timely basis," he added.

Pistole defended the agency's security practices, saying the agency tries to walk the fine line between ensuring passengers are safe and taking their privacy concerns into account. No changes will be made as the holiday season approaches, however, he told CNN on Monday. Some 2 million people are expected to fly Tuesday and Wednesday.

The ramped-up use of pat downs and full-body scanning is needed to stop nonmetallic threats including weapons and explosives from getting aboard planes, the TSA says.

Americans' reactions, however, are mixed. According to an ABC News/Washington Post poll conducted Monday, 64 percent of 514 poll respondents said they support the use of full body scans.

However, asked about the enhanced pat downs, 50 percent said they were not justified, compared with 48 percent who say they are justified. And 70 percent said the new TSA procedures will not affect their plans to fly. The sampling error for the poll is plus or minus 5 percentage points.

Recent videos of the pat downs, including one conducted on a shirtless boy, have triggered outrage. Last week, a San Diego, California, man's viral video of his clash with security screeners spawned several T-shirt designs with his "Don't touch my junk" quip.

In addition to possible security delays, wintry weather may snarl travel plans, particularly in the West.

Winter storm warnings, watches and advisories were in effect for much of the region, from California, Utah and Nevada north to the Canadian border.

A blizzard warning was issued for most of Utah, western Colorado and southern Idaho for Tuesday night and into Wednesday in some spots.

"We'll probably see a couple of feet of snow here on top of the already several feet they have seen over the past couple of weeks," CNN Meteorologist Rob Marciano said. "And that snow will be blowing sideways."

The "major winter storm" will begin to move into the central Rockies on Tuesday afternoon, bringing strong winds and heavy snow, as well as frigid temperatures -- "potentially life-threatening weather conditions," according to the National Weather Service. "Travel will be very dangerous or impossible."

In addition, an Arctic front worming its way across the West and Northwest will cause the mercury to plummet even without a blizzard. The forecast high for Seattle, Washington, which received a rare 1 to 3 inches of snow Monday, is 26 degrees on Tuesday, with a low of 13 forecast for Tuesday night. Temperatures will reach 30 degrees in Salt Lake City, Utah, with a low of 3 Tuesday night.

The motor club and travel organization AAA has estimated some 42.2 million people will travel at least 50 miles from home during the Thanksgiving travel period, which stretches from Wednesday to Sunday.

The vast majority of those -- 94 percent, or 39.7 million people -- will be driving, AAA reported. Thanksgiving travel is projected to increase from last year because of "modestly improved economic conditions," the organization said.