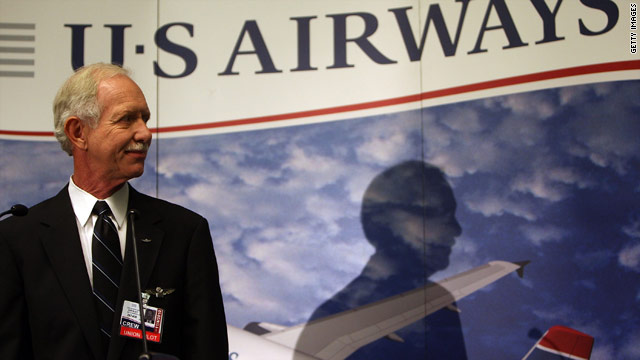 Sullenberger, who landed a crippled US Airways jet on the Hudson River last year, said the use of full-body pat-downs and advanced imaging scanners for airline personnel "just isn't an efficient use of our resources."

Sullenberger argued that transport authorities should trust pilots and flight attendants because "we're trusted partners" who are already "thoroughly screened."

Airport scanners a conflict of interest?

"We're among the most scrutinized professional groups in the country, even more than doctors," Sullenberger said on CNN's "American Morning." "It's really not an efficient use of our resources to put us through this," he added, suggesting that flight crews should be allowed to bypass much of the pre-boarding security screening that is required of passengers.

Transportation Security Administration officials are permitted to use "professional discretion" in determining if individuals should be subject to further screening, according to a TSA statement.

Meanwhile, the Rutherford Institute, a civil liberties organization aligned with the Christian right, filed suit against Homeland Security Secretary Janet Napolitano and TSA Administrator John Pistole on behalf of two pilots who refused both the full body scan and the pat-down.

Earlier on Tuesday, a public interest research group said it is suing the Department of Homeland Security in a freedom of information lawsuit intended to obtain medical records and studies that it says the agency has relied upon for its use of body scanners.

The Electronic Privacy Information Center has also asked authorities to suspend the use of advanced imaging technology and called for public hearings into its use, center spokesman Marc Rotenberg told reporters on Tuesday.

"[Scanners] present hazards when they malfunction or when they function routinely," he said.

"These things ... have been examined six ways to Sunday," Napolitano said on Monday. "The [Food and Drug Administration], Johns Hopkins University, the U.S. Science and Standards Association have all measured the radiation involved in an AIT," she said. "It's almost immeasurable, it is so small."

But a representative for Johns Hopkins University Applied Physics Laboratory said the group did not evaluate the advanced imaging machines for passenger safety. "That was not our role," said spokesperson Helen Worth. "We measured the level of radiation, which was then evaluated by TSA."

CNN could not independently confirm whether scanners pose a risk to passenger health.

Transport authorities say that passengers concerned about the technology can decline the full body scan and instead opt for manual hand-searches performed by TSA officials.

The incident sparked a debate over passenger safety and personal privacy that has remained headline news, just ahead of the holiday travel season.

Pistole, addressing a Senate Homeland Security Committee hearing on air cargo safety, veered off topic to plead with the American public to see airport security "as a partnership."