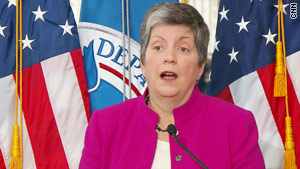 (CNN) -- Federal transport authorities are ratcheting up security measures just ahead of the holiday travel season with an awareness campaign intended to make passengers more proactive in their own safety.

The "if you see something, say something" campaign is the government's latest effort to bolster transport security, showcasing advertisements in airports, movie theaters, gas stations and local radio stations, according to a Department of Homeland Security statement on Monday.

"It is important to remember that every individual has a role to play in keeping our country safe and secure," DHS chief Janet Napolitano said in the statement.

The program is intended to "engage the public and key frontline employees" in an effort to "identify and report indicators of terrorism, crime and other threats," it said.

"The partnerships we build in communities and with travelers are critical to supporting our security mission," John Pistole, head of the Transportation Security Administration, said in the statement. "We saw with the failed Times Square attack the impact alert travelers can have and we ask for the public's continued partnership to help keep our skies safe."

The campaign comes amid growing controversy over airport screening measures that some passengers have complained are intrusive.

Over the weekend, a 31-year-old man was fined $10,000 after refusing a pat-down at a San Diego, California, airport.

Sikh advocacy groups in the United States are also publicly opposing airport passenger screening measures they say require hand-searches of turbans, despite the use of electronic imaging technology.

Despite the advent of the advanced technology, transportation security officers are permitted to use "professional discretion" in determining if a particular item of clothing should be subject to further screening, according to a TSA statement.

Authorities say the new awareness campaign is meant to bolster security procedures rather than replace existing ones.