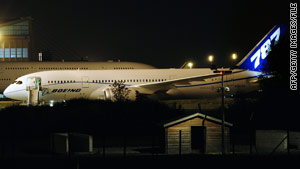 Boeing has nearly 900 orders for its 787 Dreamliner. Here, one sits last week at an airport north of Paris, France.
STORY HIGHLIGHTS
RELATED TOPICS

(CNN) -- An electrical fire on board a Boeing Dreamliner caused the plane to lose primary electrical power during a test flight Tuesday, the company said.

The crew relied upon backup systems to land the aircraft.

"The pilots executed a safe landing and at all times had positive control of the airplane and all of the information necessary to perform that safe landing," Boeing spokeswoman Lori Gunter said Wednesday.

Boeing is analyzing flight data from the plane, a process it says will take several days, to determine the exact cause of the fire. The company's initial inspection of the aircraft indicated damage to a power control panel in the rear of the aircraft.

Boeing employees were conducting a test of a system designed to prevent fires when smoke began filling the back of the cabin of the next-generation 787 Dreamliner, according to the company.

The crew was testing a "nitrogen generation system," which separates nitrogen from ambient air and pumps it into fuel tanks as jet fuel is burned during a flight, Boeing said.

The system is designed to prevent oxygen from filling the empty space and potentially igniting the fuel. There is no indication, however, that Tuesday's fire was caused by the nitrogen generation system, according to Boeing spokesman Jim Proulx.

Boeing is grounding its entire fleet of test Dreamliners pending results of its analysis of hundreds of different data measurements to determine the cause of the fire.

The Dreamliner departed from Yuma, Arizona. After about six hours of flight, smoke entered the cabin as the plane was on approach to Laredo, Texas.

"It's something that needs to be taken very seriously," said Proulx. "We need to know what happened before we can determine the likelihood of its repeatability."

The 42 people aboard evacuated using the plane's emergency slides, Federal Aviation Administration spokeswoman Lynn Lunsford said. One person was injured during the evacuation.

"We are continuing to gather data regarding this event," Gunter said in a statement. "It's too early to tell what may have gone wrong."

The plane is the second of six test Dreamliners, having undergone 179 flights and 558 hours of flight, according to Boeing data posted on its website. The company does not intend to sell the test plane to any airline customers.

Boeing says it still intends to deliver the first 787-08 Dreamliner to ANA Airlines in the middle of the first quarter of next year. ANA has 55 Dreamliners on order, which Boeing plans to deliver over the course of several years.

The Dreamliner is Boeing's new passenger jet, touted as a highly fuel-efficient aircraft made largely with composite materials.

It made its maiden flight in December 2009 after two years of delays, but the head of Boeing's commercial aircraft division told CNN in July that the Dreamliner could still make its debut in early 2011.

The company has nearly 900 orders for the jet around the world.

"If I were a prospective passenger in a 787 I wouldn't be concerned," said Snorri Gudmundsson, assistant professor of aerospace engineering at Embry-Riddle Aeronautical University. "All these bugs will be weeded out."

"Boeing is quite thorough, not just because of requirements from the FAA but because of Boeing's position in the industry," added Todd Curtis, a former Boeing electrical engineer.

CNN's Frances Causey and Jason Kessler contributed to this report.