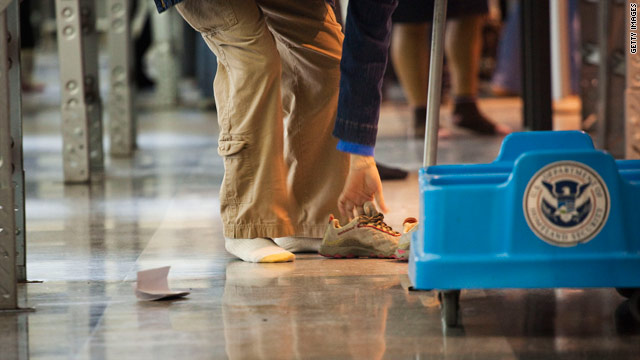 (CNN) -- Increased scanning and prodding at airport checkpoints have many in the sock-footed parade of American air travelers up in arms about security screening.

Full-body imaging machines and enhanced pat downs are among the more recent -- and controversial -- tools the Transportation Security Administration has added to its layered approach to detecting threats.

CNN.com readers have expressed and debated their views in the comments area of stories related to airport screening. Here are some common views:

Nearly 350 full-body scanning machines are in use in airports and the TSA plans to have 1,000 machines deployed by the end of 2011. Pat down procedures that allow security officers to touch passengers of the same gender in sensitive areas such as the breasts and genitals are being implemented at security checkpoints across the country.

Are body scans and pat downs unconstitutional? Courts haven't ruled yet, but at least two legal challenges are in the works.

Pilot Michael Roberts, who refused last month to submit to full-body scanning and the enhanced pat down, is working with the Rutherford Institute, a civil liberties organization, on a lawsuit challenging the constitutionality of the procedures under the Fourth Amendment.

The Electronic Privacy Information Center filed a brief this month in a suit seeking suspension of the body scanner program, arguing that the way the Department of Homeland Security instituted it violates the Fourth Amendment and the Privacy Act, among other laws.

Courts have generally allowed wide leeway for airport screening under the Fourth Amendment, which guards against unreasonable searches and seizures, according to Adam Winkler, a UCLA law professor who specializes in American constitutional law.

Many American air travelers see evolving security threats as reason enough to submit to an array of screening measures.

"If TSA played a video of the planes crashing into the Twin Towers on monitors while people are waiting for security, then people will understand why Homeland Security must take these measures to ensure the safety of the public" -- loveChrist

A 2009 Christmas Day attempt by a Nigerian man to set off a bomb hidden in his underwear aboard a Northwest Airlines flight as it approached Detroit, Michigan, accelerated the widespread deployment of full body scanning machines as a primary screening tool.

"Passengers should continue to expect an unpredictable mix of security layers that include explosives trace detection, advanced imaging technology, canine teams, among others," the TSA said in a recent statement.

Primary screening methods used in airport security usually fall under the legal heading of "administrative searches," which are generally used to enforce compliance with regulations relating to public safety. The courts will have to consider whether there's an expectation of privacy and how reasonable the search is, weighing security concerns with invasiveness, Winkler said.

"It's one thing to put your bag through an x-ray machine and have to go through a metal detector. It's another thing to have to basically submit to an almost-naked picture of yourself," he said.

The visceral response
"So no one has a right to complain if they're sexually molested? I'm sure if you had a daughter, you would complain." -- mash107

Some air travelers feel physically violated by the search techniques. Claims of inappropriate selection for additional screening have been filed with the TSA and civil liberties groups.

"I feel I was targeted by the TSA employee to go through the see-you-naked machine because I am a semi-attractive female," wrote one traveler in an e-mail complaint to the TSA obtained by the Electronic Privacy Information Center through a Freedom of Information Act request and subsequent lawsuit. The traveler was passing through security at Baltimore Washington International Airport.

In a written response to the traveler's complaint, also obtained by the privacy center, the TSA assured the passenger that the officer attending to passengers at the machine does not view the image and that a second officer who views the image in a remote location will not see the passenger.

Other passengers are unfazed by the most recent airport security measures.

"I've been patted down rather thoroughly before and it was not a traumatic experience. Felt more like when I go to the doctor for a physical." -- Stubber

Pat downs are conducted by officers of the same gender as the passenger, and passengers may request the procedure be conducted in private, according to the TSA.

The agency said it closely monitors complaints. "This ongoing process will enable us to ensure prompt, corrective action whenever we determine that security-screening policies need modification or specific employees or screener teams are the subjects of repeated complaints," the TSA said in an e-mail to the Baltimore Washington passenger.

The same traveler complained of a lack of information and clarity about the scanning technology and a passenger's right to opt out. Those who decline full-body scanning will receive alternate screening, including a thorough pat down, according to the TSA.

The security agency said there are signs in front of every scanning machine that explain the technology and point out that being screened by the machines is optional.

Air travel is optional too, some argue.

"If you don't like it, then don't fly. It's that simple. These searches are for everyone's safety. I could care less if they search me." -- GaBoy02