By Scott Steinberg, Special to CNN 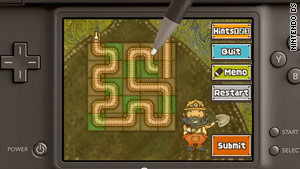 (CNN) -- With all the talk about new motion-control accessories and supporting games for PlayStation 3 and Xbox 360, it bears remembering that handheld systems aren't sitting idly by either.

While none offer hands-free gaming or full-body active play, they are more kid-friendly, easier to pack in a carry-on and sure to get just as much, if not more, attention this holiday season.

Tops for software selection, the iPhone offers more titles than any other platform at a greater range of prices. All of them are downloadable on demand, including hundreds of free casual electronic games.

The Nintendo DSi isn't nearly as expensive, is built to withstand the rigors of playground life and also offers deeper, more complex experiences in a wider range of established genres.

Whichever you choose, all promise endless hours of entertainment throughout the fall and winter. Following are five games worth packing on any vacation or extended layover.

Beyond the catchy Victorian-era "steampunk" cartoon aesthetic, there's much to enjoy in the latest installment of the popular puzzle game series.

Players not only get to fiddle with new logic, math and spatial brainteasers, but can also access mini-games and more in-depth hints when stumped. A quirky cast of characters and memorable selection of conundrums help it leave a lasting impression.

Experience evolution at its finest as you guide an amoeba-like creature to grow by gobbling up smaller organisms while avoiding being devoured yourself.

Perfectly suited to a touchscreen interface, the game lets you simply tap to hurtle forward or speed away from danger (which also makes you shrink). Bigger is definitely better here, with the game delivering surprisingly large entertainment value on a microscopic scale.

This fantasy dungeon hack marries signature Disney characters and worlds with detailed role-playing elements and a colorful anime aesthetic. A prequel to the original adventure, the game offers an epic storyline and an intricate battle system that will captivate kids and adults alike as they explore universes inspired by Peter Pan and Sleeping Beauty. Just beware, as it's a major time sink.

Solve puzzles by writing in words (e.g. "ladder," "cow," or "moon"), which are then transformed into corresponding on-screen objects. You can even modify creations using 10,000 adjectives to make them smaller, add wings, equip them with swords, etc.

The title's freestyle approach to play will impress almost as much as such technical trickery, with random experimentation just as fun as actually making forward progress. You never know what will happen next.

Use your slingshot to launch the birds or simply point and shoot to send them flying into structures that collapse atop the poor swine in a heap of animated rubble. At 99 cents, it's cheap -- and instantly gratifying -- fun for all.