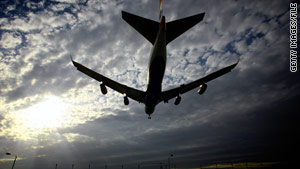 (CNN) -- A consumer air travel report shows a steep dip in tarmac delays, improvements in on-time performance and baggage handling and, despite that encouraging news, a spike in passenger complaints.

The number of complaints rose in most categories, from fares to refunds, with flight problems (including cancellations, delays and missed connections) topping the list, followed by reservations/ticketing/boarding problems. The number of baggage related complaints ranked third this year, dropping from the second most complained about category in 2009.

"Even though complaints about flight problems are up, this doesn't reflect real-world increases in flight delays and cancellations, which are comparable to last year's numbers," DOT spokesman Bill Mosley said in an e-mail.

On-time performance in August was up slightly, from a 79.7 percent on-time rate in 2009 to 81.7 percent this year. The rate of cancellations among major carriers remained steady at 1 percent year over year.

One flight was delayed on the tarmac for more than three hours in August, dropping dramatically from 66 flights in August 2009, according to the report.

Between May and August, the first four full months since new rules were imposed threatening heavy fines for airlines stranding passengers on the tarmac for more than three hours without the option to deplane, only eight tarmac delays exceeding the limit have been reported. Between May and August of 2009, 529 flights reported delays exceeding three hours.

"These numbers show that the tarmac delay rule is protecting passengers from being trapped indefinitely aboard an airplane -- with little or no increase in cancelled flights," U.S. Transportation Secretary Ray LaHood said in a prepared statement.

"With the summer travel season behind us, it appears that the rule is working as planned," he said.

So with so many gains in airline performance, why the jump in passenger complaints?

Several factors may be at work, according to the DOT's Mosley.

"Historically, when there has been more-than-usual publicity about airline consumer issues, complaints tend to increase. There has been a great deal of such publicity this year," he said.

Also, in January, the department publicized a redesigned website for aviation consumers, with a prominent feature that makes filing complaints easier for travelers, Mosley said.