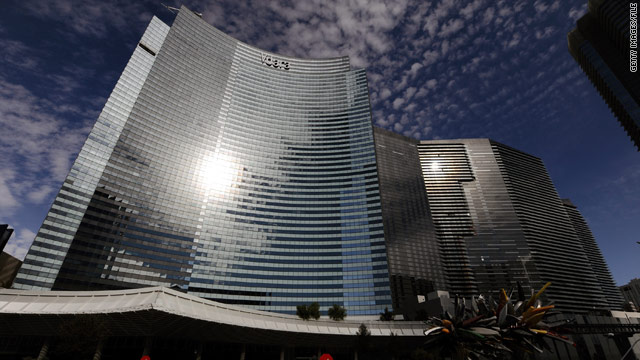 (CNN) -- "Death rays" sound more like a sci-fi creation than a pool-side concern, but guests soaking up the sun at the Vdara Hotel in Las Vegas, Nevada, might want to take cover.

According to a report in the Las Vegas Review-Journal, the reflective hotel's south-facing tower can bounce rays that will melt plastic and singe hair at certain times of the day and year.

Visiting lawyer Bill Pintas from Chicago, Illinois, had a scorching encounter and said hotel pool employees told him they call it "the death ray," according to the report.

Pintas, who co-owns a Vdara condo, told the Review-Journal his hair was singed as he was reclining on the pool deck around noon on a mid-September day.

"I was effectively being cooked," Pintas said. "I started running as fast as I could without looking like a lunatic."

The rays also melted the thin plastic bag around his newspaper, Pintas said.

Hotel designers were aware of potential solar "convergence" and applied a film that reduced the problem by about 70 percent before the Vdara opened in December 2009, according to MGM Resorts spokesman Alan Feldman.

"What remains are seasonal hot spots that are most acute of course in the summertime," Feldman said. Historic high temperatures in Las Vegas this summer have intensified the problem.

Hotel staffers are aware of the hot spots and move guests around the pool deck when necessary, Feldman said. Planners are also looking at additional shading options or putting planters where the rays get particularly hot, he said.

The hotel hasn't received any complaints of injury beyond those reported by Pintas.

"Death ray" media coverage in recent weeks hasn't had any effect on bookings, Feldman said, and a 72-hour rate sale under way now is unrelated to the buzz.

"I suppose there might even be folks who are very passionate about the sun who want to come see it," Feldman said.

"It isn't a visible thing ... if you were standing in the middle of it when it's 110 [degrees], you're going to feel it. We happen to be in a much cooler week this week so right now, today, it might actually feel good," he said, laughing.