By Ashley Judd and John Prendergast, special to CNN 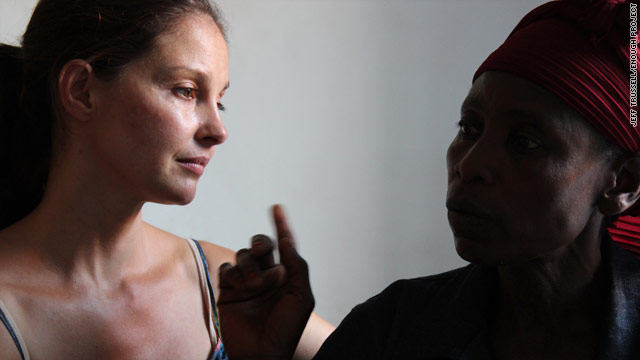 Editor's note: Ashley Judd traveled to eastern Congo, her second time to the region, with John Prendergast of the Enough Project at the Center for American Progress. Since 2003, Judd has traveled the world visiting vulnerable populations, especially girls and women, focusing on grass roots solutions that transform and save lives. Among other affiliations, she serves on the board of Population Services International. For more information on the campaign against conflict minerals, visit raisehopeforcongo.org.

Democratic Republic of Congo (CNN) -- Our friend Kika is a long-term resident of Panzi Clinic, a remarkable facility in eastern Congo that manages, under extraordinarily difficult circumstances, to accommodate a small number of women who have survived excruciating acts of gender violence. For the sufferers who have heard of Panzi, post-rape, they will do anything to get there. Kika did. She crawled. It took her one month.

Kika was fetching water one early morning, as she always did. On this day, something that is becoming almost inevitable for girls and women happened to her. Armed militia appeared and began to sexually assault her. She screamed, attracting her older brother Patrice's attention. He came running. The militia welcomed their next victim by demanding he rape his sister. He refused. They insisted again. He said, "Kika is like my mother. I will not."

They stabbed him to death with their bayonets, then repeatedly raped Kika.

Patrice's now deceased and Kika's now broken body were carried back to their small home. After a week, Kika smelled very bad. She had had no medical attention. Her own family insisted she leave. That was when she began to crawl.

What links Kika's anguish and any one of us reading this? What connects us to her catastrophic suffering and that of so many other women and girls like her from Congo?

The ingredients in our electronics, that's what. The way they are being mined has everything to do with armed militia gang raping tens of thousands of civilians in what is grimly known as the worst place In the world to be a girl or woman.

A silver lining has emerged in the dark clouds that have hung over eastern Congo for the last decade and a half of war and human rights atrocities. A bill recently passed in Congress and signed by President Obama has targeted the deadly trade in conflict minerals originating from the Congo -- tin, tungsten and tantalum -- that power our cell phones, laptops and other electronic devices while fueling the deadliest war in the world.

The bill and the corresponding consumer movement in the United States demanding conflict-free electronics products has sent a signal to those profiting from this deadly trade that the status quo of horrific gender violence is unacceptable, the profits purchased with so much Congolese blood are at risk, and that change is required. The window of opportunity for leveraging peace is huge.

There are at least 15 initiatives attempting to address the problem of conflict minerals by governments, companies and international organizations. This is the usual story of good intentions paving the road to hell, given that these overlapping and for the most part uncoordinated efforts will largely cancel each other out.

Secretary of State Hillary Clinton should follow up her August 2009 trip to Congo and lead the United States in partnering with the governments of Congo, Rwanda and Uganda to initiate a process that ties all these efforts together into one major initiative, the aim of which is a certification scheme for conflict minerals, backed by a robust monitoring mechanism on the ground as well as tracing and auditing requirements to ensure due diligence.

The objective of mineral certification is to change the commercial calculus from violence to stability, from smuggling to legality, from collapsed state to rebuilding state, from private bank accounts to public revenues.

The chain of change begins with the consumer of the end products: laptops, cell phones, etc. The consumer demands change from companies and governments. Companies and governments lean on mineral to metal refiners. Refiners in turn press Central African exporters. Exporters subsequently -- for their economic survival -- demand transparency from suppliers right down to the mines, if that is what making money requires. It is a classic domino effect.

Change in the first instance won't come from the gun or the courtroom. It will come when it no longer pays off to violently and illegally extract minerals from the Congo. The status quo is so deadly and parasitic, it must be disrupted.

Who actually most wants reform of this deadly minerals trade? It turns out that the two constituencies that have the biggest interest in reform are the survivors of violence in Congo like Kika and consumers of electronics products in the United States and Europe who learn what their purchases are doing to the Congolese people. That means the primary allies of our human rights consumer movement for conflict-free products are the women and girls who have survived sexual violence, the families who have been displaced and the kids who want opportunities beyond the barrel of a gun.

Opinion: Stopping flow of conflict minerals to your cell phone

The multiple roots of Congo's crisis can't be addressed one by one in isolation. If major progress in dealing with the unparalleled violence in the eastern part of the country is to be achieved, a number of causes have to be attacked at once as part of a larger vision or strategy. The time is ripe for a grand bargain to be struck among Congo, its neighbors and the broader international community.

Motivation for such a deal for Congo and its neighbors would come from the urgency to avoid an embargo of minerals from the region. A U.S.-led international effort to create an accepted certification of Central African minerals is the only route to forestalling an embargo. International efforts on conflict minerals provide the point of leverage on all parties that did not exist before to drive broader reform and peace-building. Conflict mineral certification is a means to an end, a catalyst for peace. For the Congo, donors should use that leverage to work for a comprehensive multiyear plan to reform the Congolese army, which may be the largest single violator of human rights in the east, and the broken justice system, which enables the violations.

When asked how she had endured such suffering, the otherwise straight-backed and stoic Kika wept. "Panzi Clinic did not abandon me," she said, sopping tears with a kitchen towel worn at her waist. The statement is profound.

The question for us, then, is, will we abandon her? Will we abandon tens of thousands of girls and women already incapacitated by the extraordinary violence done to their bodies and spirits, crippling a whole society? Will we abandon those who will be raped, either again, or for the first time, by armed militia extracting the minerals used in the electronics we love and rely on? Or, will we as consumers, as Americans, as members of the human race, take these simple actions, sustained over time, to make gender violence atrocities stop?