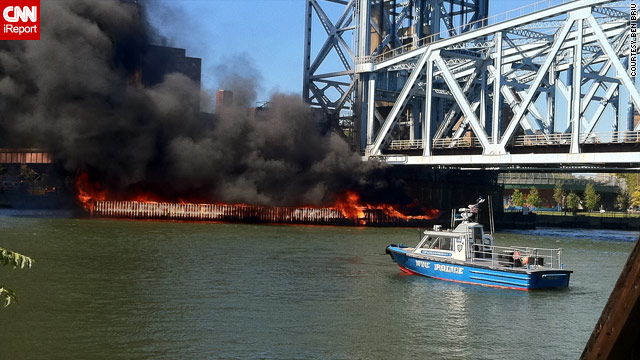 The Fire Department of New York is attempting to determine the cause of the blaze.
STORY HIGHLIGHTS

Editor's note: For more about this story, visit the website of CNN affiliate WABC. Also, check out this iReport video of the blaze.

New York (CNN) -- More than four hours after a major fire at a New York railroad bridge put the brakes on Metro North commuter train service to and from Grand Central Terminal, all service was restored Monday afternoon, a spokeswoman said.

The regular train schedule resumed about 4:15 p.m., after Metro North inspected the 138th Street lift bridge over the Harlem River and confirmed the signal and power system were functionally properly, said Marjorie Anders, a spokeswoman for Metro North.

She told CNN the fire burned the bridge's bumper, which is a group of wood pilings that surrounds the span's supports in the water. The bumper protects the supports from possible damage when boats go through.

The Fire Department of New York is attempting to determine the cause of the blaze.

About 60 firefighters battled the fire, which began before noon and was being contained by 1 p.m., said fire department spokesman Frank Dwyer. No injuries had been reported, he said.

Video from CNN affiliate WABC showed thick smoke and flames from beneath the Manhattan side of the bridge.

Aaron Donovan, a spokesman for the Metropolitan Transportation Authority, said subway service out of Grand Central was not halted by the blaze.

More than 135,000 commuters ride Metro North in and out of New York City every day, Anders said.