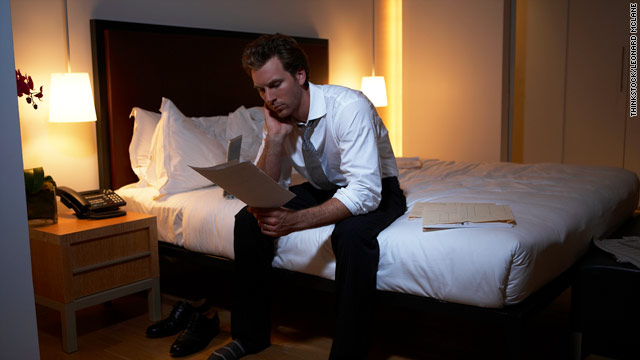 Many hotel guests are taking a second look at their beds for any evidence of bedbugs, critters that feed on blood.
STORY HIGHLIGHTS

(CNN) -- A hotel may tout a great location, tasteful decor and soft Egyptian cotton sheets, but for many people looking for a room these days no amenity can shake the dread of what could be lurking just out of sight.

In recent months, increasing reports of bedbugs -- little critters that feed on blood and like to hide in mattresses, box springs and other places close to where people sleep -- have unnerved hotel owners and grossed out many travelers.

"Makes me itch just thinking of them," wrote a poster earlier this month on the travel website Fodor's.com.

"The thought of bedbugs totally freaks me out," added another on Flyertalk.com, a website for frequent fliers. "Horrible little creatures."

"I was attacked by bedbugs. What a nightmare!" exclaimed a traveler in a recent review of a Manhattan hotel posted on TripAdvisor.com.

Hotel guests have also been leaving stories of bedbug sightings on websites devoted to the pests, like The Bed Bug Registry and BedBugReports.com. Sample entry: "There was a bedbug that fell out of my hair and another found on the bed after waking up!"

Such horror stories, combined with a government statement this summer warning of an "alarming resurgence in the population of bedbugs" in the United States, aren't exactly reassuring for hotel managers, whose business depends on attracting travelers with the image of a relaxing, spotless home away from home.

Most are loath to even mention the b-word -- even in the context of being bedbug free -- for fear of scaring away guests.

"It's a word that makes everybody very nervous," said Daniel Mount, associate professor at Pennsylvania State University's School of Hospitality Management. "It's such an obnoxious, gross issue."

Mount, who has been in the industry and teaching about it for 30 years, said he's never seen anything like this. Any mention of bedbugs in a traveler review on websites like TripAdvisor can be very damaging to a hotel, he added, one reason it's important for each property to designate someone to monitor the postings.

The Rodeway Inn in Estes Park, Colorado, is one of a number of hotels that have left a response on TripAdvisor.com refuting a guest's claim of bedbugs.

In its online reply in July, the hotel said it immediately inspected the room, including the bedding, the mattresses, the carpeting and the headboard, and found no bugs of any kind -- nor had it ever found any at the property.

"From what I hear, the bedbugs are moving like wildfire, but so are the stories about the bedbugs," said Lil Ciezczak, the general manager of the Rodeway Inn, adding that she checks comments about the hotel on TripAdvisor every day.

Guests have been calling the hotel to inquire about the review and she's seeing more jittery travelers in general, Ciezczak said.

TripAdvisor doesn't verify the reviews left on its site, but it allows hoteliers to respond to the posters, spokesman Ferencsik said. Hotels usually take any complaints to heart, he added.

Bedbug 101
• Bedbugs are not known to transmit disease

• They can live several months without a blood meal

• They hide during the day in places such as seams of mattresses, box springs, bed frames, headboards

• They tend to live within 8 feet of where people sleep

"It's a piece of news that can take on a life of its own. Something about the topic of bedbugs really captures the imagination," Ferencsik said.

"What travelers want to hear is that hoteliers take it seriously and that they act if there might be a potential problem."

Ferencsik encouraged travelers to apply "an Olympic judging scale" to online hotel reviews, ignoring the most glowing and the most negative posts and taking what's left in the middle to get a good idea of whether a property is in line with their travel needs.

Where the bedbugs are

Meanwhile, hotel guests may want to be most on guard in New York, which was named the nation's most bedbug infested city in a report released last month by the pest control company Terminix.

Philadelphia, Pennsylvania; Detroit, Michigan; Cincinnati, Ohio; and Chicago, Illinois, also made the top five. Terminix compiled the list by analyzing calls from people complaining about bedbugs to its service centers around the country.

Overall, bedbug calls have increased by 81 percent since 2000, according to the National Pest Management Association, which conducted the 2010 Comprehensive Global Bed Bug Study with the University of Kentucky.

Still, the increase in bedbugs has had a minimal impact on the vast majority of hotels, according to the American Hotel & Lodging Association.

It also reminded travelers that hotels are often helpless in stopping the pests from showing up.

"Bedbugs are brought into hotels by guests; it is not a hotel sanitation issue," the association said.

High-end hotels at risk, too

In other words, your chances of encountering bedbugs aren't smaller at spotless high-end properties, as evidenced by singer Lauren Hildebrandt, who said she was bitten on her back and shoulders while staying at a luxury hotel in New York earlier this month.

"People should be aware of the danger in NYC hotels right now," Hildebrandt said, according to USA Today. "I couldn't sleep at night, because I kept thinking they were in my bed."

The financial impact of bedbugs on the hotel industry, if any, is hard to gauge. It may cost a hotel hundreds if not into the thousands of dollars per room to get rid of an infestation, Mount said. But the majority of hotels are bedbug-free, he added, and people are still traveling. Vigilant staff trained to look for signs of bedbugs can reduce the chances of an infestation.

The real impact may be psychological: Jittery guests who are constantly wondering whether they'll encounter the pests.

Travel experts advised hotel guests to take some precautions -- like never putting their luggage on the bed and inspecting the seams of the mattress for signs of the critters -- but to also relax.

"The reality is that the vast majority of people are not going to have a problem with bedbugs when they're staying at hotels."

Have you been worried about bedbugs when staying at a hotel or have you encountered the pests? Let us know in the comment section below.