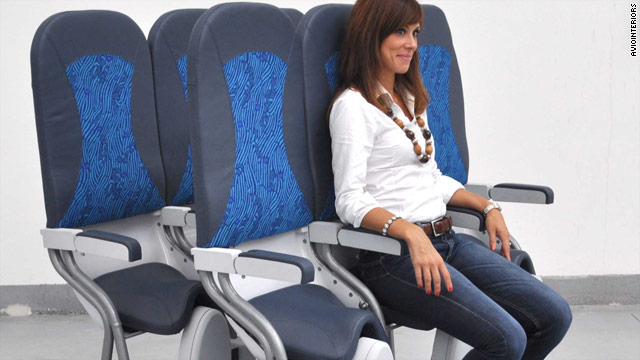 (CNN) -- Cramped in coach? One company is looking at a new way to trim legroom in the cheapest seats.

The SkyRider seat, developed by Italian firm Aviointeriors, would offer airlines a way to squeeze in more passengers by reducing the space between rows of seatbacks to just 23 inches. The seat pitch in most airlines' economy class cabins is 30 to 32 inches.

SkyRider has not been approved by the Federal Aviation Administration.

Jami Counter, a senior director at airline seat mapping site SeatGuru.com, believes regulatory barriers are just one reason this type of seating is unlikely to be adopted by American air carriers. Passenger comfort is the other major hurdle.

On its website, Aviointeriors said the "ultra-high density" seat is intended for a new basic cabin class.

"The SkyRider has been designed and engineered to offer the possibility to even further reduce ticket prices while still maintaining profitability," the site said.

The SkyRider was designed for shorter flights. The company compares the forward seating position to that of a motor-scooter rider or horseback rider.

"For flights anywhere from one to possibly even up to three hours ... this would be comfortable seating," Dominique Menoud, Aviointeriors director general, told USAToday. "The seat ... is like a saddle. Cowboys ride eight hours on their horses during the day and still feel comfortable in the saddle."