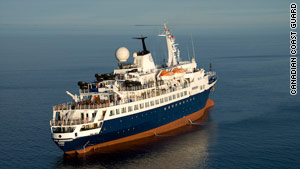 The grounded Clipper Adventurer is stable, but rests with a slight list, according to Adventure Canada.
STORY HIGHLIGHTS

(CNN) -- The Canadian Coast Guard finished the job of ferrying passengers Monday from a cruise ship that ran aground on an unmapped rock.

Officials aboard the Clipper Adventurer reported their troubles Friday. The crew failed to dislodge the ship during high tide on Saturday.

Sunday, a Coast Guard icebreaker arrived to transport the people on board to land.

"All 128 passengers were safely transported from the Coast Guard icebreaker, Amundsen, to the community of Kugluktuk" on Monday, said Theresa Nichols, a spokeswoman with the Canadian Coast Guard.

In addition to the passengers, 69 crew members also were on board, according to Nichols.

Kugluktuk is a small town on the shore of the Arctic Ocean. Accommodations for the passengers have been arranged by the cruise ship company, said Nichols. The passengers are expected to fly to the Canadian city of Edmonton.

The grounded vessel is stable, but rests with a slight list, according to the company that operates the cruise ship, Adventure Canada.

The company said that while the passengers were stranded, they were able to enjoy ship-board programs, and some even took in some sun on the disabled ship's deck.