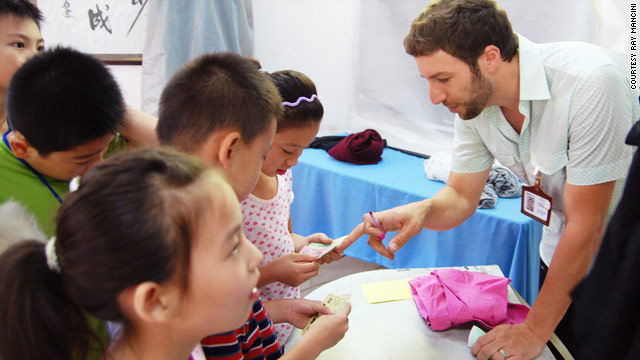 (CNN) -- It's common for newlyweds to honeymoon abroad. It's less common for them to fix kids' bikes during their trip -- but Aaron and Kristen Berlin did just that two days after saying their vows.

The Massachusetts twentysomethings got married in October and spent five days volunteering at an orphanage in southern Thailand before exploring Bangkok, northern Thailand and Cambodia.

"We learned a lot about the culture," Aaron Berlin said. "That was one of the great things about volunteering. We were really incorporated into the daily lives of the children and the volunteers who ran the orphanage."

The two are examples of what some call "honeyteers" --­ newlyweds whose honeymoons double as volunteer projects. These couples not only tour distant locales but also get involved with the communities they find there.

"I think it's just, going to Cabo is getting really old," said Alexia Nestora, who writes the blog Voluntourism Gal. "This is a way to give back to the community and connect a bit more. Before, you had a bit of a stereotype of going out Peace Corps style. Now it's a bit more mainstream."

Today's newlyweds were in college when the "volunteer boom" began, she adds. Now that they have grown up and found jobs, they want to go back.

Lisa and Yvan Lagasse had long dreamed of visiting Africa by the time they booked their flight to Moshi, Tanzania, for their honeymoon. There, they taught English and French to teenagers in a boys' home through a Cross-Cultural Solutions volunteer program.

The two had also talked about going to a beach, but the Moshi trip won out in the end. Both said the trip wouldn't have been the same without their companion.

"It's such a life-changing experience," said Lisa Lagasse, "such a humbling experience, that to have someone there with you,­ especially your partner, who understands what you went through and learned­ -- without that, the experience would have almost died on us."

During their four-week stay, the couple stayed in separate men's and women's housing during their honeymoon. It didn't matter, because they were there to volunteer -- and getting to know the local kids was the highlight of their trip.

The Lagasses are incorporating Swahili into their own children's names and have even started looking into adoption. One day, they hope to bring their young son with them for a visit.

"We just want him to grow up to understand that there are other people in the world less fortunate than us, and we have to be thankful for everything we have," said Yvan Lagasse.

Kam Santos of Cross-Cultural Solutions said the organization's volunteer projects all lead to an overarching goal. In other words, the work doesn't end after four weeks. The next group of volunteers moves the project forward.

"The relevance is in the continuity of the relationship and ongoing support of the organization," Santos said. "What we see globally is increased attendance in schools and increased awareness of issues faced by the organizations."

For some couples, these kinds of trips also raise awareness about the life they will share with their partner.

Lina Fenequito and Ray Mancini married in June 2008. They went on their honeymoon in Xi'an, China, about a year later when they could get time away from the web design company they own.

Mancini said the trip was an opportunity to learn about his wife's heritage.

"Lina's mom is from China, and I know Chinese people here, but it really gave me an appreciation for the culture and the incredible history," he said.

"When you go there, it's just overwhelming. When we have children, they'll have a part of this. It'll be part of their heritage and their history. It sounds very sentimental, but that's what I felt."

The couple taught English to students ages 8 to 14, collaborating with translators on lesson plans. In one of the scenarios they designed, students "bought" clothes using fake money, then modeled them in a classroom fashion show. The experience showed Mancini another side of his wife.

"I saw her as a teacher, as there with the children, and that's exciting for someone hoping to be a father some day. You see her as a leader. She knows a little Chinese, and I don't know a lot, so it was nice to see her getting us around and helping me out."

"It's a bonding experience," Fenequito added.