Can lightning bring down a plane? 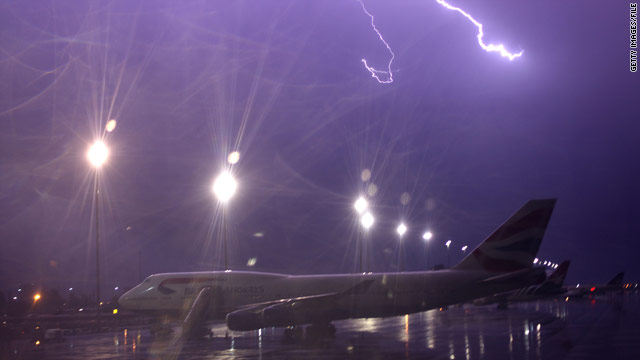 (CNN) -- Lightning can be scary even when you're safely tucked away behind brick walls on solid ground, so the idea of a bolt striking an electronics-dependent, fuel-filled plane hurtling through the air can be terrifying.

But it happens more often than you think.

It's estimated that lightning strikes each plane in the U.S. commercial fleet about once a year without any serious consequences, according to Lightning Technologies Inc., a Massachusetts company that designs lightning protection for civilian and military aircraft.

YouTube: Watch a plane being struck by lightning in flight

Still, news that a bolt may have been a factor in Monday's crash of a Boeing 737-700 jet on the island of San Andres, Colombia, has likely alarmed many air travelers.

One passenger was killed after the plane broke apart while trying to land in bad weather. The pilot reported a lightning strike, El Tiempo newspaper said.

If a bolt did play a role, it would be one of very few incidents in recent history of lightning bringing down a plane.

The last confirmed civilian plane crash in the U.S. directly attributed to lightning was in 1967, when a bolt caused a catastrophic fuel tank explosion, according to Lightning Technologies.

Video: A close look at the Colombia plane crash

Much has changed since then to avoid such accidents.

"They've learned a lot over the years from modern aviation about what to do to help protect the plane and basically how to avoid lightning all together," said CNN meteorologist Rob Marciano.

"But either way, you're going to run into it, especially as much as commercial airplanes fly. The bigger ones, they will try to fly around the bad storms, but at some point they have to fly through some of these."

When they do, airliners are well-equipped to handle lightning bolts, said William Voss, the president and CEO of the Flight Safety Foundation, an Alexandria, Virginia-based nonprofit group dedicated to the improvement of aviation safety.

Voss talked with CNN.com about how aircraft deal with lightning. The following is an edited version of that interview.

CNN: How big an issue are lightning strikes to planes?

William Voss: Airplanes have been designed for years to deal with lightning strikes pretty well. Since the 1930s, it's been clearly understood that aircraft will be subjected to lightning strikes, so they're sort of designed to take it.

And they do it by basically making sure there's a conductive path so that the lightning runs around the skin of the aircraft. It is dissipated out safely through points that have static wicks [antenna-like devices on wingtips] and so on, things that help the electricity flow around the aircraft and back out to the atmosphere.

You don't really see the fuel igniting or aircraft breaking apart, and most of the time you don't see any damage at all. It dissipates as designed. Sometimes the lightning bolt is substantial enough that it will actually maybe punch a little hole in the skin as it goes out, but that's about all that it really does.

CNN: Is it possible for lightning to cause a plane to crash these days?

Voss: Pretty unlikely. I can't say anything is impossible, but we certainly don't see that happening. It's pretty well down on our list of concerns, again because we have a lot of experience with this, and aircraft get hit by lightning every day.

CNN: If a bolt strikes a plane, what kind of damage could it do?

Voss: You normally see damage to the wing tips or the tail. It's usually a sharp, pointy part of the aircraft. Sometimes you see some damage to that, which is highly localized, and if it's as big as your fist, it would be amazing. But it's usually more in the line of maybe the size of a quarter -- a hole punched in the aircraft.

CNN: What about the electronics?

Voss: The electronics could be susceptible, but they do develop electronics and test [them] assuming static discharge is an issue, because even without lightning, static buildup on an aircraft is significant, and so to a great extent the electronics have been hardened for it.

So you don't normally see much of an upset on the electronics.

CNN: How about the fuel tank?

CNN: So it seems like the testing is pretty rigorous for planes.

Voss: Oh, absolutely. Lightning is not an unexpected threat, so it's something that people have designed around pretty well over the last 50-60 years.

CNN: If you're on a plane and it's struck by lightning, what do you feel?

Voss: Probably nothing. You might notice the bright flash.

CNN: You wouldn't feel a jolt or something similar?

Voss: You probably wouldn't feel anything at all because it just gets routed around the outside the aircraft. Almost the same thing that happens to your car. If you're in your car and you get by lightning you might not even know it happened.

CNN: If pilots suspect a plane was hit by lightning, would it be grounded?

Voss: They would certainly inspect the aircraft in the event you had some sort of damage, where it could have exited some place and blown a little metal out. That's also the reason that pilots walk around the airplane still. It may seem old-fashioned, but mechanics and pilots do check the aircraft before every flight just in case something like that could have happened.

CNN: Landing and take off is always a critical time, so if lightning strikes then is that more dangerous than being hit mid-flight?

Voss: It could be distracting, but the far greater hazards on landing and departure are associated with the changes in wind direction and wind shear with thunderstorms. That's a far more hazardous circumstance.

YouTube: Watch a plane being hit by lightning on take off

CNN: So should the average passenger be even worried about a lightning strike on a plane?

Voss: Not really. Lightning is just not a real big issue. The things that surround lightning, like the turbulence, the wind shear and so on associated with thunderstorms are far greater hazards than the lightning, even though lightning is by its nature a bit frightening.