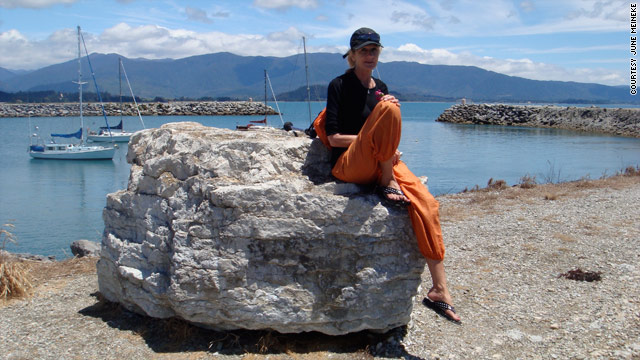 June Meineke relaxes in Pohara, New Zealand, at the end of her solo six-month trip around the world.
STORY HIGHLIGHTS

(CNN) -- Long before "Eat, Pray, Love" author Elizabeth Gilbert began contemplating the solo journey that would change her life and create a literary blockbuster, June Meineke was dreaming of taking a trip around the world.

So when Meineke took an early retirement from her job, she came up with a plan, but no set itinerary.

The only thing she knew is that she would fly to Paris, France, in September and return to the United States from Auckland, New Zealand, six months later.

She would choose the rest of her route along the way. She would also travel alone.

"It was the trip of a lifetime. I would highly recommend it to anyone and I'd love to do it again," Meineke said of the trip that began last fall and ended in March.

The journey took her from France, through Germany, Poland, Bosnia and Croatia to Turkey. From there, it was on to India, Dubai, and finally New Zealand.

Along the way, Meineke made a startling discovery.

Advice to solo travelers
• Test traveling on your own. Before you take a big trip solo, drive 20 miles outside your home zone and go have lunch or see a movie.

• Your first trip solo might be going cross-country to see a friend, then exploring that friend's city by yourself. You can branch out from there.

• If you don't want to eat alone, go to the bar area of a restaurant. There are always other single people there who want to chat or you can talk with the bartender.

• In places where you'll stand out, buy some local clothing when you get there so you can blend in a bit better.

• It's important to have confidence. Consider a self-defense course that will help you hold yourself in a certain way.

"You would not believe the number of women traveling alone. There were more women traveling on their own than men," said Meineke, who is in her 50s and lives in Atlanta, Georgia.

Opening up to the world

"Eat, Pray, Love" -- both the book and the new movie starring Julia Roberts -- is fueling lots of interest in the experiences of solo travelers, especially female ones. There's just something romantic, exhilarating and liberating about the idea of setting off on your own and exploring the world and yourself along the way.

No companion? No problem.

Gilbert said her book would likely be missing many of its most memorable characters had she not embarked on the journey by herself. Being alone simply forces a traveler to open up more, whether out of loneliness, curiosity or boredom, she added.

"You cannot have the experiences traveling with a partner that you have traveling alone. You just won't," Gilbert told CNN.com earlier this year.

"There are different kinds of travel for different purposes. I do think there's a certain time in life when it's a really wise thing, just as a human being, to kind of go out and put yourself in the world and see what comes," Gilbert said.

People who travel alone make up a quarter of all U.S. leisure travelers, according to D.K. Shifflet & Associates, a tourism research company. It found that slightly less than half of U.S. solo travelers are women.

They travel alone for different reasons. Some are single, divorced or widowed (Meineke's husband passed away 18 years ago) and don't let the lack of a partner or like-minded friend stop them from going on an adventure. Others are married, but enjoy doing their own thing and conquering the world by themselves.

"There's an element of feeling self-sufficient when you're on your own and things happen -- you never have a perfect trip -- and when something goes sideways there's an empowerment to feeling like, 'Wow, I just got myself through that,'" said Beth Whitman, author of "Wanderlust and Lipstick: The Essential Guide for Women Traveling Solo." She also runs a women's travel website. 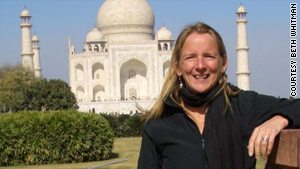 Beth Whitman travels at least once a year internationally on her own. She loves visiting India.

Whitman, who is married and lives in Seattle, Washington, talked with CNN.com just hours before she began a solo trip to Papua New Guinea.

She started traveling on her own in college, creating itineraries that would impress any adventurer.

Loneliness can be a factor during such trips, but it usually doesn't last long, Whitman said.

"What I find is that just at the point where you start to feel lonely and sorry for yourself, somebody comes along -- you meet great friends along the way, whether it's on a train ride or a bus ride or you land at an airport and you just buddy up with people to share a taxi," Whitman said.

Outside the comfort zone

Still, the idea of being on your own away from home can be off-putting for many travelers.

When asked whether they had ever taken a vacation alone, 43 percent of respondents in an informal CNN.com poll said, "Yes, I enjoyed it," and almost a quarter answered, "No, but I'd like to."

But 30 percent said, "No, I wouldn't enjoy it," and 4 percent responded that they had taken a vacation alone but wouldn't do it again. More than 35,000 people answered the online survey question last month. 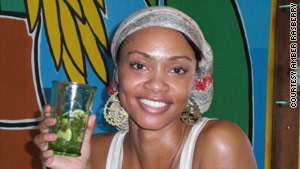 Amber Rasberry has traveled to Spain and the Caribbean by herself.

Amber Rasberry set out for Spain by herself exactly because she wanted to get out of her comfort zone. The 32-year-old Los Angeles, California, resident decided to go for it after she was laid off from her job in 2005.

"I just bought the plane ticket first. That's how I knew, OK, there's no turning back," Rasberry said. "And then I figured everything else out after that."

She lived in Spain for 3½ months, enrolling in language school and taking side trips to Portugal and other destinations.

Rasberry indulged her solo travel bug again in 2008 when she took a summer vacation by herself in Curacao; she was just looking at countries on a map and booked her stay as soon as her eyes fell on the Caribbean island. Rasberry loved her time there, she said, not bothered by the idea of going to a resort where many of the guests might be coupled up.

She's also become comfortable with a situation many solo travelers may dread: Eating alone in a restaurant.

"That's always the most self-conscious time because you're walking in by yourself and you're like 'Oh, table for one' and then they clear the other side of the table. But I always bring reading material and always have a glass of wine and just take my time," Rasberry said.

"I love traveling and so I'm going to do that to the best of my ability and if there's somebody who wants to come, great. But if not ... I'm still going to do it."