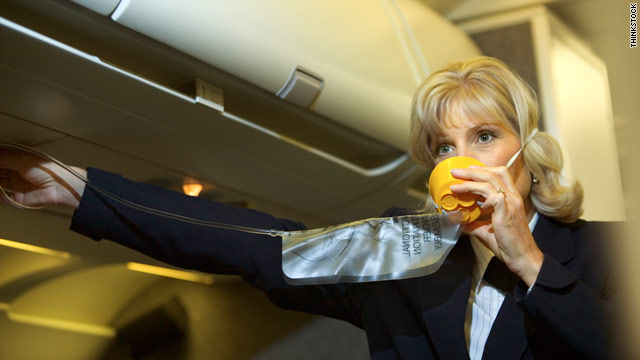 (CNN) -- It's safe to say air travelers are paying more attention -- and maybe giving a little more respect -- to flight attendants after the incident on a JetBlue flight that has mesmerized the country and put a new spotlight on the once-glamorous profession.

Crowded cabins, strict security and the lack of food and manners have affected flight attendants as much as passengers, but many fliers are just starting to realize their frustrations after Monday's altercation at New York's John F. Kennedy airport.

The details have already become legend.

Steven Slater, a JetBlue flight attendant, got into an argument with a passenger who was trying to remove a bag from the overhead bin while the plane was still taxiing, according to a source familiar with the incident.

A female passenger "was struggling to shove her carry-on luggage [into the overhead bin] and she was competing with another passenger for the slot. They were shoving luggage around," said Slater's attorney, Howard Turman. "He [Slater] came over to assist, she started cursing and -- based on the information -- slammed the overhead luggage bin on his [Slater's] head," Turman said.

After the flight landed at JFK, Slater approached the same female passenger, who was retrieving her bag from the bin while the plane was still taxiing to the gate, according to a source familiar with the incident. Passengers are required to stay in their seats with their seat belts fastened until the pilot has reached the gate and gives the all-clear sign.

Slater then got on the plane's public address system to say he'd had it, grabbed a couple of beers and slid off a plane through the escape chute.

He's in trouble with the law, but not with the public, where there's growing support for his dramatic exit.

"Wow, it's been very, very appreciated and it seems like something has resonated with a few people and that's kind of neat," Slater told CNN affiliate WABC.

Many flight attendants and airline industry workers have been leaving comments on CNN.com to voice their support for Slater and vent their frustrations about rude passengers.

"As a flight attendant for a major U.S. international flag carrier, I've been called a b**** and assorted other names while on board an aircraft, had food trays thrown at me, and treated worse in this job than any other. There are days after constant belittlement and attempted subjugation I wanted to do the same thing," wrote stewRN.

Time: The stress of being a flight attendant

Others were concerned that the flying public sees them as little more than waiters and waitresses in the sky. For one, the indignities of the profession were just too much.

"I used to be a flight attendant. I left just after 1.5 years on the job. I was tired of not being treated with respect by passengers and management. After all these years, I still remember this kid saying loudly, 'Here comes the trash lady.' His father was laughing next to him," wrote a poster who identified herself as soundoff123.

Another former flight attendant recalled being horrified by the treatment airline employees receive from passengers.

"The flying public in America is the rudest bunch of people I've ever seen. In my short experience, I was cussed out, spit at, had things thrown at me, and [was] threatened with all sorts of violence. The traveling public believes they should be able to ignore rules and do whatever they want and you are a just a slave there just to serve them, that is until the plane crashes then you're supposed to be their savior," said ben5339.

Rudeness 'can be unbearable'

Flight attendants must put up with a lot that passengers don't know about, added a poster who said she worked as a flight attendant for seven years.

"The work rules that most airlines have instituted in these days of cutting expenses are a cause for a lot of the anger. Couple this with a public that is more and more unhappy with conditions in the air and you have a very volatile situation. Passengers need to understand that the primary purpose of a flight attendant is to evacuate the aircraft in event of an emergency and enforce the rules that the FAA has determined are necessary for passenger safety," wrote myket.

Rude passenger behavior isn't limited to the plane cabin, airline employees said. A gate agent vented about his experiences on the ground.

"I happen to work for a discount airline and must say the rudeness of some people can be unbearable at times. Some of you miserable people come to the airport with chips on your shoulders and make it your business to blame everyone else for your problems," wrote mzindpndt.

"We airline employees are just trying to do our jobs. Passengers, please leave the negative energy at home."