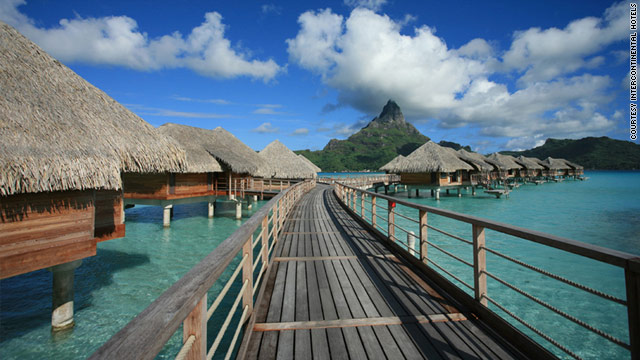 Seawater from the depths of the ocean is used in cooling systems at Bora Bora's InterContinental Resort.
STORY HIGHLIGHTS
RELATED TOPICS

(Mother Nature Network) -- The island of Tahiti boasts some of the most pristine beaches in the South Pacific. The postcard-worthy settings of the island, and those of its French Polynesian peers like Bora Bora, have been drawing travelers for centuries.

Unfortunately, Tahiti can be very expensive. Airfares often top $1,000 from the U.S., though Air Tahiti Nui has been offering promotional prices and discounts for families over the past year.

Like other mainstream beach destinations, parts of Tahiti's coastline are dominated by the kind of resorts that serve cocktails in coconut shells. Fortunately, for those who are turned off by the piña colada scene, vast parts of the island are virtually untouched and uninhabited. This is especially the case in the mountainous inland sections and on the small peninsula known as Tahiti Iti (Little Tahiti).

Tahiti's natural beauty is reason enough to dive into your savings to pay for a vacation. But the island has a decent infrastructure, and small-scale tourism is alive and well. Couple this with the fact that the interior wilds offer some of the South Pacific's best, most accessible eco-tourism excursions, and Tahiti is an attractive and nearly practical tropical destination.

With a strong local food scene -- if you know where to look -- and eco-friendly sleeping options, the island is greener than many similar mainstream resort destinations.

And to step out of that mainstream, all you have to do is head inland.

Tahiti's public transportation system consists of vehicles known as Les Trucks. A cross between a cargo-hauling vehicle and a passenger bus, the colorfully decorated autos ferry locals (and anyone who can produce the $2 fare) from town to town around the island and between major sites in the capitol city of Papeete.

Scooters and bicycles can be rented on the island for much cheaper than the $100 daily car rental fee. These two-wheelers are ideal for getting around without getting behind the wheel. Roads are quite good and drivers are not usually aggressive. Because of the relatively small area of all of French Polynesia's islands, the distance to a destination will never be unreasonably long.

Tahiti and its sister islands have more than their allotment of high-end resorts. However, there are plenty of smaller options, including bed-and-breakfasts, guesthouses and bungalows. These are cheaper and, because of their smaller size, greener alternatives. One of the best of these sleeping spots is the Vanira Lodge, a collection of thatch-roofed bungalows in less-touristy Tahiti Iti. The Relais Fenua is a more centrally located guesthouse that provides a small-scale experience and reasonable rates.

Eco-friendly traits even carry over into the luxury resort sector. Bora Bora's InterContinental Resort offers moneyed guests a chance to stay in luxurious, over-water bungalows. A state of the art cooling system pumps seawater from the depths of the ocean to be used in lieu of traditional air conditioning units. Not only is this system nearly twice as efficient, but it also produces no pollutants. The Intercontinental on Tahiti gives regular financial support to Te Mana o te Moana, a conservation organization that works to protect wildlife and ecosystems in French Polynesia.

MNN: 8 of the creepiest trees on earth

Food carts called roulottes are the cheapest eating option. They are found in the evening along the waterfront in Papeete. Whereas many larger restaurants focus on French-themed cuisine that is heavy on imported ingredients, roulottes are more likely to have locally sourced foods.

Papeete's central market, Marche Papeete, is a great place to find locally grown fruits and vegetables. Shopping here is a good green option, especially for travelers who are staying in a place, such as a bungalow, with access to cooking equipment.

Tahiti's interior is a world apart from the idyllic seaside scenes. Mountain streams and waterfalls are found in landscapes that range from dense foliage to rocky slopes. There are hiking trails and plenty of guided tours that pass over the island's peaks, the most notable being Mount Orohena. Meanwhile, the Fautaua Valley boasts even more stunning waterfalls, rock formations and a distinct lack of tourists.

Tahiti Iti, the sparsely inhabited peninsular area of the island, features more difficult walks, but is a worthwhile destination for those who want to get up close and personal with the flora and fauna of the islands. The far edge of the peninsula is the last place on Tahiti where visitors can find unspoiled coastline, with beaches that are accessible only from the water.

Conditions can become harsh at higher elevations, so all but the most experienced tropical trekkers would do well to get their feet wet with a guided tour. A company called Tahiti Evasion offers one-day, guided hikes to the aforementioned sites.

The island of Moorea is only a few minutes' boat ride from Papeete. The easy access, by ferry or catamaran, makes this a popular place with Tahiti tourists. Moorea is more rural and less touristy than Tahiti, with large areas occupied by farms and local life continuing unhindered by the tourist scene. Moorea has the same type of hiking trails as Tahiti and a stunning peak, Mouaputa, that draws climbing enthusiasts.

Tahiti is expensive, especially for those who do not seek the typical tropical dream vacation. But, it is easy to step outside of the mainstream tourist scene and find yourself lost in some of the most natural landscapes in the Pacific. And, of course, you could still indulge in the luxury that has made Tahiti famous and, provided you have chosen a green resort, not have to worry too much about the environmental impact your pampering is having on the surrounding lands and waters.