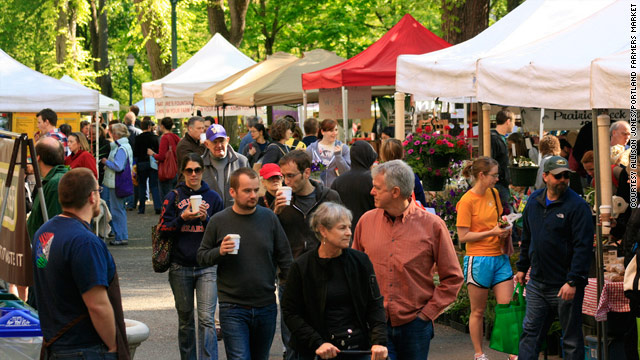 (CNN) -- Wherever he goes, Richard Ruben stops by the local farmers' market.

The chef and author of "The Farmer's Market Cookbook" says he visits markets to get a taste of the culture off the tourist track.

Even though travelers can't buy a pound of beans and cook them, they can still enjoy visiting markets on the road, says Janet Fletcher, author of "Fresh From the Farmers' Market."

"You can still get a wonderful sense of what's grown in that community, and what you can find in restaurants when you dine there," she added.

Nina Planck, author of "Real Food: What to Eat and Why" and founder of London Farmers' Markets, advises travelers to shop as though planning a picnic.

"Go straight for the quiche lady, or sausage guy, and see if he has some cured meats," she said. "Or the cheese people and the fruit people."

These food writers and chefs told CNN their picks for farmers' markets across the United States -- and you can vote for your favorite farmers' markets in the American Farmland Trust's contest.

Curious about local specialties? You might try the Buddha's hand at one of Santa Monica's four markets. You'll know it by its yellow color and its long, curling "fingers."

"It's a bizarre little citrus fruit that has almost no meat. It's only about the zest," said Ruben. "I'll never get it in New York, but I know that in December, if I'm on the West Coast, it will be in their farmers' market."

"You need a slightly larger demographic and, shall we say, adventurous food culture."

"For the quality and variety of the produce, it's probably the top market in the country," said Fletcher, who trained at Berkeley's Chez Panisse. Specialties include Blue Bottle Coffee and unusual June Taylor organic jams.

The Midwest boasts some of the nation's most highly rated farmers' markets. Ruben's favorite is the Green City Market in Lincoln Park.

"For me, in the Chicago market, it wasn't as much about the discovery of something new. It was just the richness that the fertile earth of the center of this country produces, the beautiful produce, the luxuriousness of our land," he said.

Got a hankering for wild mushrooms? The Portland Farmers Market may be your ticket.

When Fletcher visited one of the market's six locations, she found a mushroom vendor that had "incredible" wild mushrooms at a price she never would have seen at her local market.

As a cooking instructor, Ruben takes students to farmers' market locations around the city to shop for ingredients, but Union Square is his favorite.

"There's a guy who does pheasant here and makes the most incredible smoked sausage -- of 100 percent pheasant meat," said Ruben. "There's another vendor that will grow a potato variety from the Andes, which I will long for in October."

Planck, who ran the New York's farmers' market program, Greenmarket, in 2003, says she loves the smoked trout fresh from the Catskills.

Santa Fe's market is distinctive not only for its size, but for its wide variety of chili peppers.

"At the height of chili season, [they] have the country's most elaborate, diverse collection of chilis, because they are so important to that New Mexican way of cooking," said Fletcher. "That's one of the things I look for at a farmers' market: what's unique to a community."

Planck says there is only one kind of authentic farmers' market -- a "pure" farmers' market, where farmers sell directly to customers without middlemen.

Dupont Circle enjoys the best of those farmers' markets, she said.

"As a shopper, I look for fresh food above all. If it's fruits and vegetables, and if it's meat or dairy, I'm looking for high-quality foods -- grass-fed meat, pastured eggs -- and I'm looking for someone selling the food who knows what he's talking about," she said.

For crops you've probably never seen before, try Alemany for a "global" experience.

"The farmers are Southeast Asian, Hispanic, Indian, so it's very culturally diverse in terms of what's available and who the shoppers are," said Fletcher. "Alemany Market is a great window onto the cultural diversity of the San Francisco Bay Area."

With more than 40 Washington State farmers and small food vendors, travelers are bound to find something to take back with them.

For Planck, it was Holmquist Hazelnut Orchards' hazelnuts.

"When you're traveling with kids, you're desperate for things that don't make a huge mess: cured meats, jerky, ham, hard cheese, apples, nuts," she said. "Nuts are good if you're in nut country."

"The great thing about a farmers' market is that, if it's thriving, it's because people love it -- and if people love it, it's a good market," said LocalHarvest director Erin Barnett. "They all have their own cultures, but that culture is reflective of the community. And that's what makes it great."