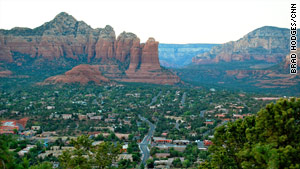 (CNN) -- Dozens of affiliates of the American Civil Liberties Union have issued travel alerts for people heading to Arizona this Fourth of July holiday weekend -- the group's latest effort to condemn the state's new immigration law.

Arizona's measure stipulates that police can ask the residency status of people being investigated for a crime.

"Although the law is not scheduled to go into effect until July 29, the ACLU is concerned that some law enforcement officers are already beginning to act on provisions of the law," the ACLU said on its website.

"We hope the alerts provide people with some measure of protection from illegal harassment from law enforcement and inform them of their rights should they encounter it."

The travel alerts -- issued by ACLU affiliates from as far away as Alaska and New York -- inform people of their rights when stopped by law enforcement in Arizona, the ACLU said.

Critics say the new law will lead to racial profiling and prevent police from doing their jobs by undermining trust in the Latino community. City governments and organizations opposed to the law have targeted Arizona with protests and boycotts

But Arizona Gov. Jan Brewer and other state officials say the law is necessary because of the increasing number of people illegally entering the state from Mexico. In addition, Brewer has said the law does not target an individual's specific ethnicity.

"It wouldn't matter if you are Latino or Hispanic or Norwegian," she said last month. "If you didn't have proof of citizenship and the police officer had reasonable suspicion, he would ask and verify your citizenship. I mean, that's the way that it is. That's what the federal law says. And that's what the law in Arizona says."

In late May, a CNN/Opinion Research Corp. poll found that 57 percent of those surveyed favored Arizona's new law, while 37 percent opposed it.

The same poll also found that six in 10 respondents found that the federal government should focus on stopping the flow of illegal immigrants into the U.S., deporting those already here and supporting more border security.