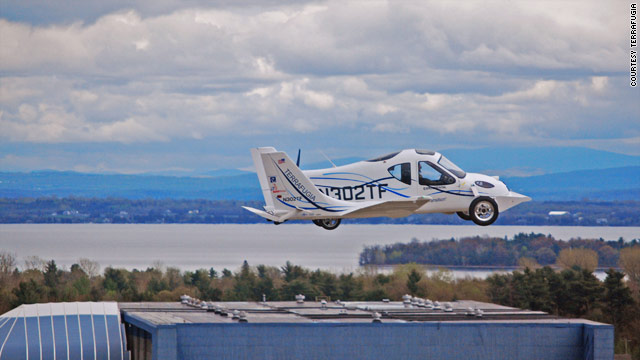 (CNN) -- A highway-worthy airplane moves one step closer to production with a recent weight exemption approved by the Federal Aviation Administration.

The Transition Roadable Aircraft, developed by Massachusetts-based engineering firm Terrafugia, will be allowed a maximum takeoff weight of 1,430 pounds, the same allowance made for aircraft designed to operate on water.

Other planes in the class, called Light Sport Aircraft, are limited to a maximum takeoff weight of 1,320 pounds.

"The main reason for that additional weight is the additional safety features that the Transition has -- because it's designed to be operated on the road -- that aren't found in other light aircraft," said Anna Dietrich, Terrafugia's chief operating officer.

A protective safety cage, airbags and an energy absorbing crumple zone are among the extra features.

Light sport aircraft are limited to carrying two people -- a pilot and a passenger. The pilot must have a Sport Pilot certificate, which requires 20 hours of flight training. "It's a certification more appropriate to the size and complexity of these simple aircraft," Dietrich said.

"There's actually programs that you can do in about two weeks. You can take a couple weeks off of work and come home a pilot, so it's a very accessible, very exciting way of getting into aviation and giving yourself that additional freedom and flexibility," Dietrich said.

Going from plane to car "takes about the same amount of time as putting down your convertible top," and the transition takes place from inside the cockpit. After landing, a cockpit-operated system folds up the wings, and the pilot can drive away.

Transition is designed for trips of up to about 450 miles and can travel about 100 miles per hour in the air and "highway speeds" on the ground of "65, 70, [miles per hour] -- something like that," Dietrich said.

"We're really not pushing the performance as an automobile because it is really designed to be used as an airplane that has this additional capability," she said.

"Functionally, it's a lot closer to an airplane than it would be to your car."

The price is more in line with aircraft as well; Terrafugia anticipates the Transition will cost $194,000. The first delivery will occur in about 18 months, Dietrich said.

The Transition still has to receive FAA certification and National Highway Traffic Safety Administration testing before it goes into production. The Transition completed more than 20 test flights last year.