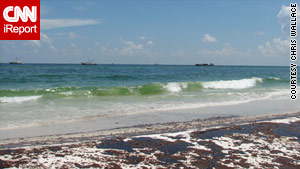 (CNN) -- The oil spill in the Gulf of Mexico has coastal states and visitors bureaus working hard to keep the public updated and reassure beach-bound travelers.

Oil has affected sections of Pensacola Beach and Perdido Key beaches. A health advisory has been issued for Gulf waters west of the Pensacola Beach fishing pier, according to the Pensacola Bay Area Convention and Visitors Bureau. Visitors are urged to avoid contact with oil on shore and in the water.

Waters east of the pier and on the north side of the island along the Santa Rosa Sound remain open.

"We are all heartbroken and concerned about recent impacts from the Deepwater Horizon incident but rest assured the situation on our beaches remains dynamic," said Ed Schroeder, director of Visit Pensacola, in a statement on the bureau's website.

"The oil impacts on our beaches are intermittent and can change within hours or within a day due to the dynamic nature of the currents and changing wind directions," the department's website said.

The department urges visitors to avoid entering the water when oil is present.

The beaches of south Walton County are open, according to an update on the website for the area's Tourist Development Council .

Tar balls, tar patties and sheen continue to be found in northwest Florida, with the heaviest effects reported in Escambia County, according to Visit Florida, the state's tourism corporation.

Gulf Shores and Orange Beach have experienced significant oiling, according to the Alabama Gulf Coast Convention and Visitors Bureau.

"The beaches are open and visitors are still welcome to sunbathe and walk the beach, but we strongly suggest they swim in a pool or enjoy our many off-beach activities," the site said.

The Alabama Department of Public Health has issued an advisory against swimming in waters off Gulf Shores, Orange Beach and Fort Morgan, and in bay waters close to Fort Morgan, Bayou St. John, Terry Cove, Cotton Bayou and Old River.

Last week, the department also issued a no-swimming advisory for Dauphin Island and the Mississippi Sound.

Advisories have been issued for beaches in Jackson and Harrison counties. The beaches are not closed, but state officials "advise people to be aware of their surroundings while recreating." Visitors should avoid contact with oil.

All of the Gulf Islands National Seashore sites, which are in Florida and Mississippi, are open, the National Park Service's website said.

But several spots have been affected by the oil spill, and a public health advisory is in effect parkwide.

"If you see or smell oil in the water or on the beach, avoid contact with water and report it to the nearest lifeguard or park ranger," the park service's website said.

The oil's biggest impact in Louisiana is on the portion of the coast from the mouth of the Mississippi River extending east, according to a state emergency website.

"Most of the Louisiana Gulf Coast, 70 percent, is unaffected by the oil spill and remains open for commercial and recreational fishing," according to the Cajun Coast Visitors and Convention Bureau website.