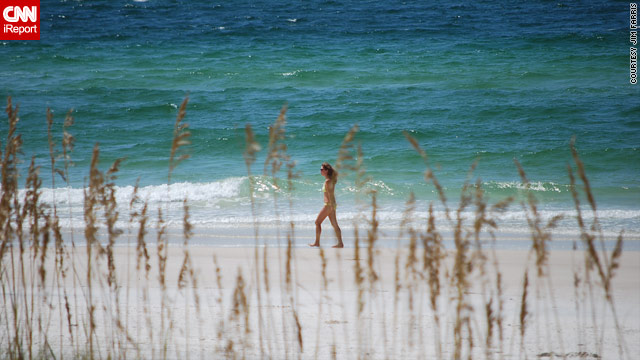 Panama City Beach, above, and most other beaches in Florida are oil-free, but tourists are reticent about renting beach houses.
STORY HIGHLIGHTS

(CNN) -- Judy Sheffield loves relaxing in Panama City Beach, Florida, so 12 years ago she made a big investment in the resort town: She bought a house steps away from the Gulf shore.

She's had great success renting it to vacationers, and it's usually in such demand that she has to turn people away during a normal summer.

But this is far from a normal summer.

The phones stopped ringing soon after the BP oil disaster hit the news, Sheffield said, even though Panama City Beach has not been affected so far by the spill. The beaches are open, and the swimming is safe, according to the Panama City Beach Convention and Visitors Bureau.

Sheffield has tried slashing her $2,600 weekly rate, and she's offering an oil-free guarantee to try to attract visitors -- so far with little success. Her rentals are down almost 50 percent, and her booking calendar is empty for most of July and all of August.

"I'm very worried about it, and I've got friends who own property there and they are very worried as well. We are concerned about making our mortgage payments," said Sheffield, who lives in Atlanta, Georgia.

"I have not slept well since this thing started. It's actually affecting my health."

Sheffield predicts it will be the worst season she's ever seen, echoing the sentiments of many beach house owners and rental companies along portions of the Gulf of Mexico, where oil -- or the fear of oil that may yet come -- has frightened away tourists.

Across most of the region, the outlook for beach house rentals this summer is uncertain at best.

The company's database has about 40 properties, which are "always, always, always" booked for the Fourth of July, but there are still vacancies for the holiday weekend this year, Bohannon said.

I have not slept well since this thing started. It's actually affecting my health.
--Judy Sheffield, beach house owner
RELATED TOPICS

Pensacola Beach is open, and the water is open for fishing and swimming, according to the Pensacola Bay Area Chamber of Commerce.

A short drive to the east, Beach House Rentals of Destin made just a fraction of the reservations it would make during a normal May, said owner Donna Ryan.

Bookings continue to be quiet, and most of the people who call the company aren't looking to make a new reservation. Instead, they're renters who booked awhile ago and are "panic-stricken from news reports" ahead of their arrival, Ryan said.

Destin's beaches are open, according to the city's website.

Beachhouse.com, a company that lists beach houses for rent around the world, has seen a decrease in activity for properties around the Gulf of Mexico since the disaster, said CEO Scott Hinkley in an e-mail. Concerned vacationers have been calling the company wanting to know when the oil will reach certain beaches, he added.

"It is hard for vacationers because some of what is out there isn't really news -- it's hype or exaggeration or worst-case scenario -- so how do they decide whether or not to follow through with their vacation?" Hinkley said.

Beach house owners in the region worry about their frustratingly empty calendars.

Tim Shearer bought two homes near the beach in Gulf Shores, Alabama, five years ago. A Jimmy Buffett fan, he named one of the properties "Five O'clock Sumwhere," a variation of a Buffett song title.

The houses usually stay rented from Memorial Day weekend to mid-August, but this year, Shearer has absolutely no rentals after the middle of July. He estimates bookings are off 60 percent or more, and he's had six cancellations so far.

The area's beaches are open, but the waters are closed to the public, according to the Alabama Gulf Coast Convention and Visitors Bureau.

Shearer said he's being flexible about the rental fees he charges, to no avail.

"People aren't even calling right now so it's kind of hard to drop your price when no one's interested," said Shearer, who lives in Atlanta.

He asks renters who call off their reservations to state that they're canceling because of the oil disaster. That substantiates his claim for lost revenue with BP, Shearer said.

"I'm counting on BP to do what they say they're going to, which is to make people whole," he said. "But I'm really concerned that the overall cost is going to be so large that they'll file bankruptcy and small people like me won't ever see anything."

Shearer urges anyone having second thoughts about coming to Gulf Shores for a vacation to reconsider. A cousin who is now staying at one of his houses reports having a great time because the area is much less crowded than usual, Shearer said.

Meanwhile, beach house owners such as him in Alabama, Mississippi and the Florida Panhandle are bracing for a cruel summer.