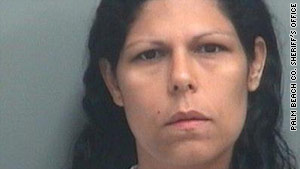 Bethsaida Sandoval has been charged with 24 counts of burglary.
STORY HIGHLIGHTS
RELATED TOPICS

Miami, Florida (CNN) -- A former Royal Caribbean Cruise Line employee has been arrested and charged with burglarizing the homes of 24 vacationers who were spending time at sea.

Police in Palm Beach County say the employee accessed personal information about reservations to find out when the vacationers would be away.

Bethsaida Sandoval, 38, a Royal Caribbean vacation planner, has been charged with 24 counts of burglary across Palm Beach County, including Boca Raton, Jupiter and Palm Beach Gardens, Florida. Sandoval's husband, John Lopez, acted as her accomplice, according to the Palm Beach County Sheriff's Office.

According to the probable cause affidavit, Sandoval admitted that she and her husband were involved in the burglaries. Her position gave her full access to victims' home addresses.

"People were on vacation, and when they returned home, they found they were burglarized," said Teri Barbera, a spokeswoman for the sheriff's office. "One common factor was that they were all on vacation with Royal Caribbean."

Sandoval allegedly told police that she printed or wrote down personal information on customers and gave the information to Lopez. The affidavit says Sandoval stated that she and her husband would then go to the houses and burgle them.

Lopez is being held on an unrelated charge in nearby Broward County. He's expected to be charged soon in the string of burglaries, according to the Palm Beach County Sheriff's Office.

Investigators believe that the burglaries took place on the first night of the cruises, while the homeowners were at sea. The ships departed from the Port of Miami or Port Everglades, in Fort Lauderdale, according to the probable cause affidavit.

The sheriff's office says Royal Caribbean has fully cooperated with the investigation.

A cruise line spokeswoman, Cynthia Martinez, said Sandoval was fired for her actions.

"Royal Caribbean does not tolerate any form of criminal activity in its workforce or operations," it said in a statement. "This is a situation involving a former employee who appears to have taken advantage of their position for personal gain. Royal Caribbean cooperated fully with authorities during this investigation and will continue providing any assistance necessary to prosecute this individual to the fullest extent of the law."

The Palm Beach County Sheriff's Office says the investigation, which took place over several months, revealed that high-dollar amounts of property, money and firearms were stolen.

"This is not normal business practice and Bethsaida Sandoval should not be in the building, or accessing Royal Caribbean computer systems at that time of night," reads the affidavit.

Authorities said Sandoval told them that she would drive and Lopez would get out of the car and use a center punch, a small tool for punching holes, to smash out the glass of a rear sliding-glass door. The affidavit says she gave the center punch to investigators.

The cruise line said in its statement, "We regret this incident occurred and hope it does not overshadow the excellent work our more than 40,000 Royal Caribbean employees do every day to provide our guests with memorable and outstanding cruise vacation experiences."

The cruise line says it is reaching out to apologize to all guests who were affected.