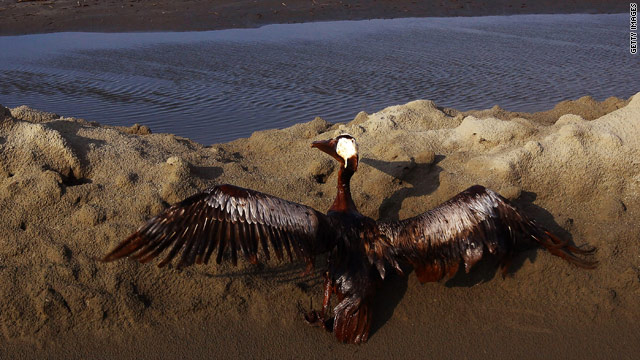 Volunteers are not allowed direct contact with contaminated wildlife, but they may assist with monitoring and other tasks.
STORY HIGHLIGHTS
RELATED TOPICS

(CNN) -- Images of oil-soaked birds and turtles have prompted such a surge of interest in helping with the oil disaster response that one volunteer organization had to convert its fax line to a second phone line, and it's still having trouble keeping up with the calls.

"It's been a steady response since about the 28th of April, when people started realizing that things were happening," said Anna Keene, programs director at the Alabama Coastal Foundation, a conservation group.

"But lately, since the images have come out of wildlife in Louisiana, we definitely have had more volunteers willing to assist with wildlife. ... It hits them in the heart."

Most volunteers won't be allowed to come into direct contact with oil on beaches or contaminated wildlife, but there are many safe ways to assist in cleanup and rehabilitation. Volunteers with the Alabama Coastal Foundation may be asked to document evidence of oil on shore or damage to offshore booms designed to keep oil away from the shoreline, Keene said. The foundation refers volunteers interested in wildlife relief to the National Audubon Society.

Since the Deepwater Horizon drilling rig explosion on April 20, nearly 6,000 volunteers have been trained in Alabama, Mississippi and Florida to help monitor beaches and prepare for oil coming ashore, according to Joan McCoy, a spokeswoman for the Joint Information Center in Mobile, Alabama.

Only paid BP employees are permitted to handle oil-contaminated materials, according to volunteer coordinators and BP spokesman Mark Proegler. BP hires and provides training for Qualified Community Responders to clean up the oil in Florida, Mississippi and Alabama. A similar program is run in Louisiana. But volunteers are often asked to "pre-clean," or remove trash from the beaches before the oil hits the shore so that there is less toxic material to remove later.

Louisiana, Mississippi, Florida and Alabama have websites for people who want to register to be considered for volunteer work. The states are working with environmental organizations and BP to respond to the disaster.

For those interested in aiding wildlife experts, the National Audubon Society is enlisting volunteers to document wildlife and assist with the rehabilitation of injured or oiled birds. But only licensed professionals may handle the birds.

"Our foremost responsibility to volunteers is keeping them safe, keeping them out of harm's way," said national field director Sean Saville.

The Audubon Society registered 5,000 new volunteers over the weekend of June 5, Saville said. With the opening of Audubon's new Volunteer Response Center in Mississippi, more than 13,000 volunteers are expected to be mobilized.

The Mississippi Commission for Volunteer Service has registered more than 4,000 volunteers, according to spokeswoman Emily Wilemon. Of those, more than 500 are from out of state, and the organization has received interest from individuals as far away as Australia and Canada. Volunteers have pre-cleaned 37 miles of beach after nearly 1,000 hours of volunteer service, Wilemon said.

Now that most of the beaches have been cleared of trash, Mississippi volunteers are mostly doing surveillance, said Wilemon. Some are working through Coast Watch, a national volunteer initiative that surveys coastal habitats. In Mississippi they have covered 46 miles of beach, recording and reporting what they see using a camera, a GPS and a tracking form.

Mississippi volunteers have also worked with the Audubon Society to monitor wildlife.

Audubon's new Coastal Bird Survey program convened Monday in Mississippi for a six-hour training session. After being trained to identify birds, volunteers will monitor coastal habitats, keep track of changes they see on a weekly to monthly basis and report back to Audubon.

Their goal is to "create a body of scientific data to show, over time, the impact of the oil spill on the ecosystem," said Saville.

Some Audubon volunteers have been deployed to assist the U.S. Fish and Wildlife Service and Tri-State Bird Rescue in the recovery and transport of injured or oiled birds.

"Our [volunteers] aren't handling birds, they aren't touching oiled surfaces, they're just assisting the teams that are out there on the ground," said Saville.

Depending on the volunteer's availability, he or she might be responsible for working phones or doing data entry in one of Audubon's offices, or monitoring a mile-long segment of the shoreline. Volunteers may sign up on the organization's website.

The type of volunteer work offered varies depending on the state and the volunteer's abilities. iReporter James Amerson of Pensacola, Florida, has been monitoring a 3-mile stretch of land near his home, taking photographs and collecting soil and water samples. He started volunteering through Escambia County, rather than through a volunteer organization.

Like other volunteers monitoring their local beaches, Amerson uses a GPS and a camera to document the shores.

"There is a tremendous amount that must be monitored," said Amerson, because of the waterways that run into local bays.

Amerson took a four-hour volunteer orientation class provided by the county and led by a health and safety manager and an emergency operations manager who assisted in the response to the Exxon Valdez oil spill of 1989.

Volunteer training may include basic safety preparation -- everything from how to dress to how to spot a tar ball -- as well as a lesson on the chemistry of oil. Although Amerson was taught how to put on a HazMat suit, he and other volunteers were not permitted to handle oiled materials.

Volunteers monitoring the coast might look for oiled or sickly wildlife, oil sheen (a very thin layer of oil on top of the water that produces a rainbow effect), tar balls, tar patties and oil.

"We're the eyes for other officials," said Amerson.