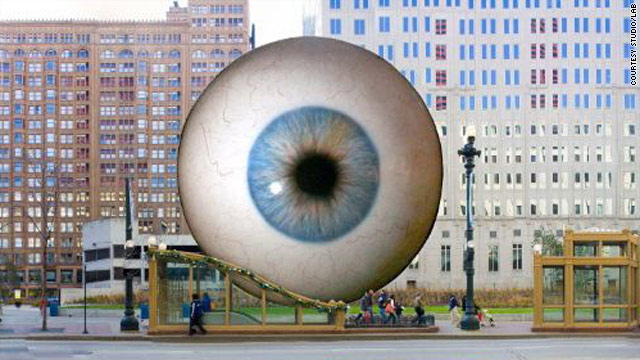 This artist's rendering shows how the sculpture EYE will look when it goes on display in Chicago, Illinois, next month.
STORY HIGHLIGHTS
RELATED TOPICS

(CNN) -- Tourists are used to staring at unusual attractions, but visitors in Chicago, Illinois, will soon have one staring right back at them in a big way.

EYE, a three-story tall "incredibly lifelike" sculpture of an eyeball, will go on display in July in the city's Pritzker Park as part of a celebration of public art in the Loop, Chicago's business district.

The three-dimensional installation, complete with a blue iris, was created by contemporary artist Tony Tasset.

"More than anything, I would like people to think it's cool," Tasset said. "My first job is always to make the space more interesting and I wanted to make something with a big impact."

Tasset chose an eye because it is a powerful symbol that has been used throughout history -- by the Egyptians, for example. He designed a similar but much smaller sculpture for a park in St. Louis, Missouri.

The steel reinforced fiberglass EYE has a blue iris because that is the color of Tasset's eyes.

The installation has a psychological edge to it and some people could find it creepy, Tasset acknowledged, calling it "surrealist-noir."

City officials hope it attracts lots of attention and visitors.

"This is going to be a pretty provocative piece and we think that everyone is going to be talking about it," said Ty Tabing, executive director of the Chicago Loop Alliance, which promotes downtown Chicago.

The cost of the installation is in the six figures, Tabing said, but he declined to be more specific. It is being funded by a special tax paid by property owners on State Street, a major shopping and dining corridor in Chicago.

Tabing acknowledged that the reaction to the sculpture would not always be positive, but he called it exciting.

"That's the beauty of art. It starts a dialogue and people are often not in agreement about art," Tabing said.

EYE will be on display from July 7 through October. Perhaps appropriately, it ends its run on Halloween.