Can you charm your way into upgrade? 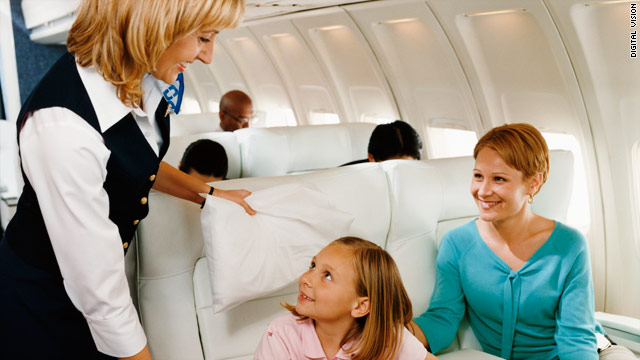 Flight attendants don't have the power to upgrade passengers in flight, but many people still try to schmooze them.
STORY HIGHLIGHTS
RELATED TOPICS

(CNN) -- An easy smile and a charming personality can take you a long way in life, but can they also help you fly in style?

Air travelers are always hunting for ways to upgrade to first or business class and for many, curiosity lingers about whether good looks or strategic friendliness can help secure a more luxurious trip -- even in these tight times for airlines.

Stories on travel message boards and some real-life examples suggest it's possible.

Take this season's finale of the hit reality-TV show "The Amazing Race," which created a bit of a controversy when the winners, Dan and Jordan Pious of Rhode Island, apparently flirted their way to the front of the plane.

The brothers were able to move from coach into the first class cabin on a flight from Shanghai, China, to San Francisco, California -- albeit toward the end of the flight rather than at the beginning -- and were the first team off the plane when it landed.

The last-minute upgrade happened after one of the men established a friendly rapport with a flight attendant and asked her about some empty seats he saw at the front of the plane, The Providence Journal reported.

"We were chatting for several hours," Dan Pious told the newspaper. "You build up a relationship over that time. I think she liked me and naturally she wanted to help us. It was huger than huge."

"There was a flight attendant that really took a liking to my brother and he milked it for all it was worth," he told RealityTVworld.com.

So if you spot some empty seats in first class -- a rare sight these days -- and turn on the charm, is there any chance you'll find yourself in a nicer cabin?

It's virtually impossible, flight attendants said. They don't have the power to upgrade passengers; in fact, they can get in trouble for trying to do so.

"I don't think that there are too many flight attendants who would be willing to risk their job to upgrade somebody," said Sara Keagle, a veteran flight attendant for a major U.S. airline who podcasts about the industry for Upgrd.com.

In recent years, the only passengers for whom she's ever seen a flight attendant take that risk are military personnel.

In any case, the other passengers are always watching "like hawks" and would be quick to complain to the airline about someone else's preferential treatment or broadcast their displeasure on Twitter, said Heather Poole, who has been working as a flight attendant for 15 years.

If you're still tempted to try, you should know that being flirty or overtly friendly wouldn't influence Keagle or any crew members she knows, she said. Still, people slyly approach her to ask for an upgrade all the time and they often flash money in addition to a smile.

"They just try it and ask if they can be moved up and the answer is always no," she said. The most she's been offered is $100, Keagle said.

In some cases, turning on the charm can have the opposite effect and make the crew suspicious of your motives, Poole said.

"That actually puts my guard up even more, especially when they use my name," Poole said. "That's a signal to me. ... 'How are you doing today, Heather?' 'So Heather, how is the flight looking?' and I'm already like, here we go."

She estimated that someone asks her if they can move to first class on every other flight.

Besides using charm, some passengers pretend they're on their honeymoon or use excuses like malfunctioning seats or broken reading lights to try to get upgraded, Poole said. None of these generally work.

Schmoozing on the ground

While the chances of being moved up to first or business class during a flight are close to nil, the odds are better on the ground before you take off.

Gate agents do have the power to upgrade passengers free -- if economy class is overbooked, for example. But it's much more difficult to score an upgrade than it used to be.

For one thing, airlines have gotten more aggressive with upgrading their elite fliers, so the first class cabin is often full before you even get to the airport, said Brett Snyder, who runs the blog The Cranky Flier.

Many airlines have also clamped down on the freedom that gate agents have to make upgrading decisions, he added.

Still, being friendly can get you noticed.

"The life of a gate agent can be a very difficult one, in particular when the weather is bad and there are a lot of delays and cancellations and a lot of craziness," Snyder said.

"So certainly a reason that a gate agent would want to upgrade you is maybe you're just being nice and you'd be amazed at how rare that might be."

One of Keagle's friends was recently stuck at an airport because of storms and delays and ended up behind a passenger who was mean to the gate agent. When his turn came, Keagle's friend made sure to be pleasant.

"He was the next passenger in line and he was nice and the next thing he knew, she was bending over backwards to help him out and he ended up in first class," Keagle said.

Have you ever tried to charm your way into first class or seen another passenger do it? Let us know in the comment section below.