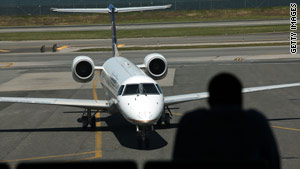 (CNN) -- Weary airline passengers may see some travel improvements if a new wave of passenger protections is adopted.

Under the rule, the maximum compensation for passengers involuntarily bumped from flights would rise from the limits of $400 and $800 to $650 and $1300. Eligible compensation amounts depend on the length of the delay from the original scheduled arrival time, with a wider window allotted for international flights.

Capacity cuts prompted by the economic recession mean passengers who are bumped may have to wait longer to squeeze onto another packed flight.

Travel expert George Hobica, founder of Airfarewatchdog.com, said the rule is likely to have an effect on overbooking, but the increased penalties may drive airfares up.

"I applaud the DOT for increasing the limits, which may discourage [airlines] from overbooking as much, but maybe the DOT should have said 'well, don't overbook,'" Hobica said.

The rule also calls for more thorough disclosure of fees and advertising that reflects an airline ticket's full price.

"Our proposed rule would drastically improve the consumer information airlines are required to post so that the consumers know what they are getting for their money," LaHood said at a news conference.

The rule would require baggage fees to be prominently displayed and fully disclosed, and passengers would be eligible for refunds of those fees when bags are not delivered on time.

The proposal also expands upon the tarmac delay rule that went into effect in April. Foreign airlines operating at U.S. airports would be required to develop contingency plans for tarmac delays and publish them to their websites. The rule also would be expanded to small and nonhub airports for U.S. carriers.

The new regulation was devised to respond to common passenger frustrations.

"Anybody that's flown knows what the problems are with flying, and we tried to incorporate the most egregious, the most serious in this rule."

LaHood anticipates implementing the rule in the fall, following a 60-day public comment period and review of the feedback. The DOT encourages consumers to comment on the rule on regulationroom.org.